Did the Trump Administration Violate Sanctions In Taking Coronavirus Medical Aid from Russia? 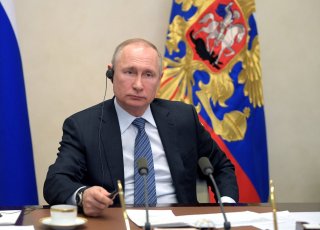 It all started as the perfect April Fools prank. On April 1, a Russian An-124 military cargo aircraft landed in New York City with medical equipment on board. The plane was reportedly filled with several tons of ventilators and face masks destined to American health professionals and frontline workers fighting the COVID-19 pandemic in the United States. The shipment came after a late night phone-call agreement between Presidents Trump and Putin the day before.

Confusion followed over the exact nature of the assistance: while Moscow dubbed the cargo “humanitarian aid,” it turns out Washington actually purchased the equipment. This alone is a fantastic irony, and it represents another successful effort by the Kremlin to exploit the coronavirus pandemic. It was also turned into a great source of pride and propaganda in the Russian press.

What followed from Moscow’s self-serving act of international propaganda is borderline ridiculous. First, it appears the United States potentially violated its own sanctions regime in order to purchase the Russian medical equipment.

The culprit is the Aventa-M ventilators produced by the company Ural Instrument-Engineering Plant (UPZ). UPZ is a subsidiary of the holding company Concern Radio-Electronic Technologies (KRET). In turn, KRET is part of the state corporation Rostec—Russia’s largest military industry conglomerate.

The core business of UPZ is dual-use. It works as a manufacturer of military aircraft equipment - notably flight instruments and sensors—but also as a producer of mechanical ventilation devices for civilian markets, among other medical supplies.

The problem is that both KRET and Rostec have been under U.S. sanctions since July 2014, after the Treasury’s Office for Foreign Assets Control (OFAC) added both entities to its sanctions list. This came as a response to Russia’s illegal annexation of Crimea and ongoing aggression against Ukraine.

Whether or not state-owned Russian Direct Investment Fund (RDIF) was involved in the transaction, it appears the Trump administration did not issue a special waiver or import license to make the Russian shipment legal under OFAC.

To add grievance to injury, KRET is one of Russia’s electromagnetic warfare (EW) national champions. Through the purchase of medical equipment from UPZ, the United States is therefore indirectly financing the development of Russia’s EW systems.

The production of EW capabilities in Russia is highly concentrated under Rostec. After the ‘wake-up call’ caused by the war with Georgia in 2008, Russia’s defence industry integrated national production efforts under KRET and the Sozvezdie concern.

Created in 2009, KRET has scaled up to become a leader in the manufacture and production of radio-electronic equipment and EW capabilities. It is at the forefront of electronics systems integration for advanced Russian military hardware - notably Mi-28 and Mi-24 helicopters, Tu-160M strategic bombers, and S-500 missile systems, among others. The holding company is also responsible for R&D and scientific development in electronics and EW.

After a decade of consolidation, EW is now a leading segment of Russia’s military industry and technology, honed by recent modern warfare adaptations. In Russian military thinking, EW represents an asymmetric force multiplier aimed at compensating what the leadership perceives as conventional inferiority against peer and near-peer competitors.

The number of specialised troops and dedicated hardware will increase in the years to come, as it is deemed a procurement priority under the current State Armament Programme until 2027.

Like all sectors of the Russian military industry, the EW segment has been impacted by international sectoral sanctions and by the breakdown of military-industrial ties with Ukraine. The negative effects of sanctions, however, have been somewhat limited in the EW segment with the injection of state capital for civilian and dual-use production, as part of the ongoing ‘civilianisation’ effort in the Russian military industry.

For instance, Ural Instrument-Engineering Plant (UPZ) has been steadily increasing its share of civilian products for the past few years. It will certainly use the pandemic to further strengthen its output of ventilators and other mechanical ventilation devices for the medical sector.

Whatever the impact of sanctions on Russia's electromagnetic warfare segment, it remains that the Kremlin sold medical equipment to the United States, who in turn violated its own sanctions regime and indirectly subsidised the Russian military industry. #RussiaHelps is now trending on social media: Moscow is certainly helping itself very well these days.

Mathieu Boulegue is a research fellow with the Russia and Eurasia Programme at Chatham House - The Royal Institute of International Affairs.