Diego Garcia: Why This Base Is About To Get Much More Important to the U.S. Military 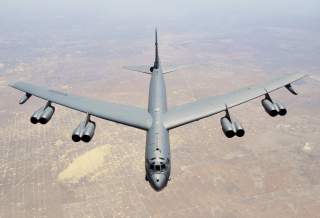 The U.S. military might need to build up its base on the British island of Diego Garcia in the Indian Ocean, one American expert advised.

Andrew Erickson, a professor at the Naval War College in Rhode Island, summarized years of his own research on Diego Garcia in a Feb. 26, 2019 explainer.

The island was a dependency of Mauritius until the United Kingdom detached it for inclusion in the newly created British Indian Ocean Territory in 1965. Between 1968 and 1973, U.K. authorities removed the local population.

The United States subsequently built a large base on the island.

"The development of Diego Garcia reflects an overall strategy to establish a flexible and enduring presence within a critical and contested space," Erickson explained.

The island’s isolated location, on the sovereign territory of a close ally, reduces the facility’s vulnerability to terrorist attacks and discord with the local population, which periodically plague many overseas bases.

Moreover, Diego Garcia reduces the need for the U.S. military to maintain a large footprint on the ground in order to protect America’s regional allies, control the spread of terrorism and weapons of mass destruction proliferation and maintain the flow of energy and commerce through key chokepoints such as the straits of Hormuz and Malacca.

These regional objectives can be achieved by engaging in an offshore balancing posture that maintains local preeminence via control of the sea. As a result, air and naval platforms, as well as rapidly deployable special operations forces, staged "over the horizon" at Diego Garcia, can enable the U.S. to pursue its regional interests with a less provocative and less visible presence.

"While this base is too distant to directly support the projection of U.S. military power ashore throughout the region (with certain exceptions such as B-52 missions) and is too small to house combat or other forces in great numbers, it also has important advantages," Erickson added.

"Notable among them is its status as a sovereign British territory with virtually no indigenous population and none currently resident [and] its relative invulnerability to attack and its presence at the seam of the two American combatant commands [Central Command and Indo-Pacific Command] that have responsibility for the Indian Ocean."

The naval facilities might be the most important to long-term U.S. plans for the region as the U.S. Navy expands in order to counter a growing Chinese fleet that itself is deploying more and more frequently to the Indian Ocean.

The U.S. Defense Intelligence Agency warned that China soon could send aircraft carriers into the Indian Ocean, perhaps beginning with Shandong, Beijing's first homemade flattop. "The primary purpose of this first domestic aircraft carrier will be to serve a regional defense mis­sion," the DIA claimed. "Beijing probably also will use the carrier to project power throughout the South China Sea and possibly into the Indian Ocean."

As part of a wider expansion, the U.S. Navy is trying to build up its own carrier fleet to 12 ships. These and other vessels need bases. In the Indo-Pacific region, where many U.S. allies are wary of hosting substantial American forces, Diego Garcia could become even more important to U.S. interests.

"American seapower requires a robust constellation of bases to support global power projection," Erickson wrote. "Given the rise of China and the emergence of the Asia-Pacific as the center of global economic growth and strategic contention, nowhere is American access more important than in this region."