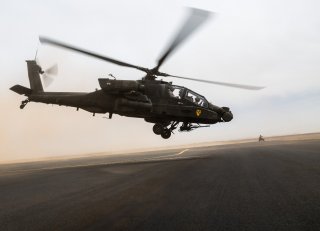 Last month the United States Department of State approved a potential agreement for a sale of up to $500 million of military hardware to Saudi Arabia. The agreement was the first major defense agreement with the Middle Eastern nation to be sent to Congress for review since President Joe Biden took office in January.

However, the agreement has opened up a number of questions and follows criticism of U.S. ties to the kingdom over its human rights record, as well as Saudi Arabia’s involvement in the ongoing civil war in Yemen.

According to the State Department, the package of military equipment would also provide continued maintenance support services for a wide range of helicopters, including a future fleet of Boeing CH-47D Chinook heavy-lift helicopters, Reuters reported in September.

“This proposed sale will support U.S. foreign policy and national security objectives by helping to improve the security of a friendly country that continues to be an important force for political stability and economic growth in the Middle East,” the State Department said in a statement.

Critics of the deal have been vocal that the Biden administration’s deal with Saudi Arabia contradicts the spirit of the White House’s policy to bar all “offensive weapons sales” to the kingdom, as those weapons could be used against the Houthi rebels in Yemen.

President Biden previously pledged to end the sale of offensive weapons to Saudi Arabia, and to end all support for the civil war, which the administration maintains has created “a humanitarian and strategic catastrophe.”

And yet, as The Guardian reported this week, “Saudi Arabia was given permission by the state department to enter a contract to support the Royal Saudi Land Forces Aviation Command’s fleet of Apache helicopters, Blackhawks, and a future fleet of Chinook helicopters. It includes training and the service of 350 U.S. contractors for the next two years, as well as two U.S. government staff.”

“To my mind, this is a direct contradiction to the administration’s policy. This equipment can absolutely be used in offensive operations, so I find this particularly troubling,” Seth Binder, director of advocacy at the Project on Middle East Democracy, told The Guardian.

It is clear that despite the harsh rhetoric from the White House earlier this year, it now seems that the administration is softening its stance with Saudi Arabia, which remains a key U.S. ally in the region.

Experts who have studied the conflict in Yemen have said they believe the Saudis have used the Apaches in operations along the Saudi-Yemen border, but to what extent isn’t clear. Michael Knights, a fellow at the Washington Institute for Near East Policy, has suggested that the U.S.-made aircraft had been primarily used in “defensive” operations along the border and that the sale of the maintenance contract shouldn’t be seen as contrary to Biden’s policy.

The State Department also told The Guardian that the United States would continue to work with the kingdom “to help strengthen its defenses, as necessitated by the increasing number of Houthi attacks into Saudi territory. This proposed continuation of maintenance support services helps Saudi Arabia maintain self-defense capabilities to meet current and future threats. These policies are intertwined with the direction by President Biden to revitalize U.S. diplomacy in support of the UN-led process to reach a political settlement and end the war in Yemen.”

It is likely that the Biden administration now fully understands that even as it touted a strong stance against Saudi Arabia on the campaign trail, the situation with Yemen is far more complex. The reality is that the United States can’t afford to let the conflict in Yemen spread into the kingdom, and the United States certainly can’t leave Saudi Arabia unable to defend itself from attacks nor have its hands tied in how it can respond. Thus it will have to accept that the weapons will be used defensively—even if sometimes the best defense means going on the offensive.