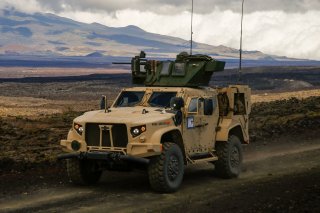 Oshkosh Defense, the American defense firm behind the Joint Light Tactical Vehicle (JLTV), wants to pitch an up-gunned version of its Humvee replacement to European customers.

The up-gunned JLTV features a modified roof that can accommodate a John Cockerill Protected Weapons Station along with an M242 25mm Bushmaster chain gun. “The only thing that we really had to change on the truck was the roof and since our capsules are a modular design, we just replaced the roof panel with the new roof panel and then mounted that turret up there," said George Mansfield, vice president and general manager of joint programs at Oshkosh Defense. "And again, that was a mockup, but we're building up a real version of it right now.”

The turret—which is made of welded aluminum and is relatively lightweight—features a unique hatch configuration that can be partially opened for observation, doubling as an escape hatch. “The other thing is this turret is modular, too,” Mansfield added. “You can up-armor it with just putting bolt-on armor so that you get a little bit more protection up there. The gun system itself is more of a standard system. It's the interface between the truck and the systems that’s important. We're sort of agnostic as far as what system goes up on top. We just develop the mounting kit and the harnesses and such to be able to operate it up on top of the truck.”

The off-road vehicle, touted by Oshkosh as a nimble upgrade over the legacy Humvee, has been widely adopted in the U.S. Marine Corps and U.S. Army. However, an up-gunned JLTV would be particularly appealing to European allies.

“Europe is very interested over there right now I think with things going on. They seem to be very interested in being able to buy a JLTV at the price point that Oshkosh can give them that and then putting some pretty good lethal equipment on top of it,” Mansfield explained. “It becomes more than just a tactical wheeled vehicle, right? It becomes a lethal asset that they can use, or employ, on the battlefield. You can get [mine resistant ambush protected]-level protection. You've got the mobility. It'll keep up with combat formations. And now you've put some lethality on top of it, right. It's a very good vehicle for what they're interested in right now.”

In an effort to optimize itself for a fight in the Indo-Pacific against China, the Marine Corps is instituting the Force Design 2030 plan. As a part of the plan, the Corps has divested all of its tanks and much of its tube artillery and mortars.

Perhaps one of the most pertinent lessons from the conflict in Ukraine is the utility of a heavily armed and highly mobile off-road vehicle. A JLTV with a large-caliber turret may be just the solution.