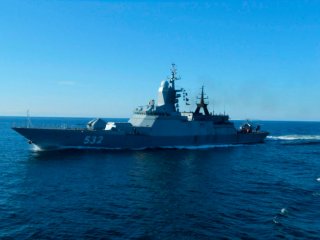 The Russian Navy is much smaller and less capable than the U.S. Navy. Yet there are indications that Russia is up-gunning some of its lighter-class warships in what could be an effort to keep pace with the United States

Russia’s Project 20380 Corvettes are somewhat analogous to the U.S. Navy Littoral Combat Ships (LCS) in terms of configuration, size, scope, and mission envelope. Recent Russian live-fire exercises involving Baltic Fleet corvettes suggest the service may be pursuing its own version of what the U.S. Navy has called “distributed lethality.”

As far back as 2015, the U.S. Navy began an ambitious fleet-wide effort to greatly up-gun its surface fleet for major power warfare with new weapons, interceptors, deck-launched missiles, and countermeasures. The strategy was quite impactful with ships such as the lighter, faster, and potentially more vulnerable LCS fleet. Therefore the Navy armed the LCS with over-the-horizon offensive missiles such as the Naval Strike Missile and upgraded ship defenses integrated with longer-range more precise interceptor weapons. The effort also extended to destroyers and amphibious assault ships and even efforts to further weaponize carriers for war with advanced defenses.

None of this has been lost on Russian who has, perhaps even in a copycat fashion, up-armed its lighter warships such as corvettes. This Russian effort continues, as evidenced by a recent live-fire anti-ship missile exercise in the Baltic Sea against a “notional” enemy warship, according to TASS.

"As part of the planned deployment to the sea, the crew of the corvette Stoiky successfully accomplished the task of delivering a missile strike against a naval target that simulated a mock enemy’s combat ship. The missile fire was delivered from the corvette’s main strike weapon: the Uran anti-ship missile system," TASS writes.

Some of the corvettes' weapons and attributes do seem aligned with or analogous to some elements of the U.S. Navy LCS fleet. TASS reports that Project 20380 Corvettes are armed with Uran anti-ship missiles, Redut surface-to-air missile systems, A-190 artillery guns, and Paket-NK anti-submarine warfare weapons. They can carry Ka-27 helicopters of any modification.

While Russia may be taking repeated steps to up gun its surface fleet, there are little or no indications that the Russian Navy can compete with the U.S. Navy in any measurable way.