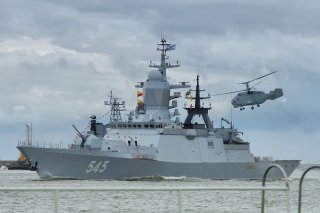 One of Russia’s latest warships is holding large-scale live-fire drills in the Baltic Sea amid mounting regional tensions with NATO.

“As part of the planned deployment to the sea, the crew of the corvette Stoiky successfully accomplished the task of delivering a missile strike against a naval target that simulated a mock enemy’s combat ship,” read a statement issued by the Baltic Fleet’s press office. “The missile fire was delivered from the corvette’s main strike weapon: the Uran anti-ship missile system," the press release added. The statement noted that Stoikiy was supported by ten additional combat and support vessels, none of which have been identified as of the time of writing. The exercises reportedly contained an air defense component, with the corvette’s crew firing an A-190 lightweight mounted artillery gun. According to the Baltic Fleet, the crew also practiced electronic warfare, maintenance, and “anti-saboteur” measures, as well as interoperability protocols with other nearby Baltic Fleet vessels.

Stoikiy is the fifth vessel in the Steregushchiy-class line of modern corvettes, laid down in 2006 and commissioned by the Baltic Fleet in 2014. Displacing at roughly 2,200 tons, the Steregushchiy-class corvettes are outfitted with Russia’s advanced Paket-E/NK torpedo system and can carry the new Uran anti-ship missile, intended to strike fast surface ships. The Kashtan close-in weapon system (CIWS) of the lead Steregushchiy-class vessel, Steregushchiy, has been replaced on subsequent vessels by twelve Redut vertical launching system (VLS) cells with medium-range surface-to-air missiles (SAM’s) from the S-400 missile defense system.

The Russian navy consists of five principal formations—the Northern, Baltic, Black Sea, and Pacific Fleets, as well as the Caspian Flotilla. The Baltic Fleet, which operates primarily out of Russia’s Central European enclave of Kaliningrad, fields several of the country’s latest modernized corvettes from the Buyan-M, Karakurt, and Steregushchiy classes. The Fleet currently deploys only one submarine, drawn from the aging Soviet-era Kilo-class. It appears the Navy does not have any immediate plans to take significant steps toward addressing the Baltic Fleet’s submarine deficit. The country’s new flagship nuclear-powered submarines‚the Borei-class strategic ballistic missile submarines (SSBNs) and Yasen-M cruise missile submarines—will reportedly not make their way to the Baltic and Black Sea Fleets because the latter two are not typically meant to operate in oceans.

In the years following the 2014 Euromaidan crisis, the Baltic region has seen a sharp spike in military tensions between Russian and North Atlantic Treaty Organization (NATO) forces. In late 2020, a Russian Su-27 fighter almost attacked a U.S. F-15C fighter that the Kremlin accused of encroaching on the flight path of a Russian VIP plane in Baltic airspace.