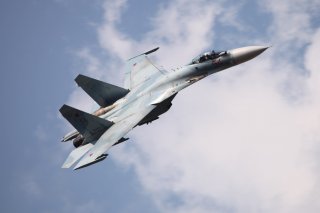 Here's What You Need to Remember: There are currently no corroborating details to confirm or dismiss the Russian account. Interceptions are exceedingly common in the Baltic region, though some are tenser than others; as Krasnoperov points out, the Su-27 pilot was trained and apparently ready to attack the F-15C had it not promptly veered off course.

In another illustration of ongoing Russia-NATO military tensions over Baltic airspace, released footage from last year shows a Russian Su-27 fighter making a sharp turn into an American F-15C.

The Russian account is not implausible, given that Kremlin officials frequently fly to and from Kaliningrad -- a Russian enclave in Europe nestled between several NATO countries -- over Baltic airspace. For instance, a similar altercation between a Su-27 and F-16 occured in June 2017 while Russian Defense Minister Sergei Shoigu was en route to Kaliningrad onboard a Tu-154 airliner.

Even so, there are currently no corroborating details to confirm or dismiss the Russian account. Interceptions are exceedingly common in the Baltic region, though some are tenser than others; as Krasnoperov points out, the Su-27 pilot was trained and apparently ready to attack the F-15C had it not promptly veered off course.

Mark Episkopos is a frequent contributor to The National Interest and served as research assistant at the Center for the National Interest. Mark is also a PhD student in History at American University. (This first appeared last year.)