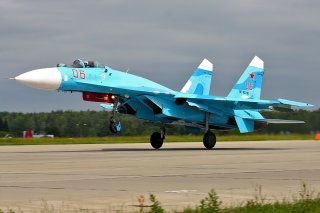 A Russian Su-27 fighter has intercepted a Swedish Gulfstream reconnaissance plane in neutral airspace near the Russian border.

The Russian Ministry of Defense released a statement later that day: "An aerial target approaching Russia's state border was spotted by Russian airspace controls. A Su-27 fighter jet from the Air Force was employed to intercept the target."

The same day, the Russians published footage of the interception. The clip, already short at just over half a minute, is generously spliced with b-reel of the Su-27 taking off and landing. However, it does show approximately ten seconds of an Su-27 tailing the Gulfstream plane in question. According to the statement, the Gulfstream was flying with its transponder turned off. The Su-27 briefly shadowed the Gulfstream “at a safe distance” before the latter altered its course, turning away from the Russian border.

Russia frequently scrambles jets to intercept unidentified planes approaching its vast airspace. However, the Kremlin seldom publishes video footage of the act; what, then, prompted it to do so on this occasion? The Defense Ministry’s statement and video comes on the heels of a prior dispute, in which Sweden accused Russia of violating its airspace with an Il-20 plane and two Su-27 Flanker fighters that flew 135 kilometers off Sweden’s southern coast.

Russia flatly denied the charges: "All flights take place in strict accordance with the international rules governing the use of airspace, without violations of the borders of other states." The Gulfstream interception comes less than a week after Sweden’s accusation. Publicizing what is otherwise a mundane, low-scale reconnaissance flight is a way for Russia to turn the tables on Sweden with a counterclaim.

The Su-27 is one of the most prolific Soviet fighters, with hundreds still in use by the Russian Air Force and Navy. Despite being over three decades old, the Su-27’s cost-effectiveness and role versatility render it one of Russia’s best candidates for a wide range of low-intensity tasks, like intercepting unidentified reconnaissance aircraft. As previously highlighted The National Interest, Su-27 planes play a particularly crucial patrol role in Russia’s enforcement of its Baltic airspace. However, the original Su-27’s viability against modern air defense systems and fifth-generation fighters is a different question.

Like the American F-14 Tomcat and F-15A Eagle fighters that it was meant to compete with, the Su-27 is showing its age with increasingly outdated weapons and radar systems. Perhaps the greatest differentiating factor between the Su-27 and its F-15 rival is that the latter has ample combat experience in high-intensity conflicts. The Su-27 has had much fewer battlefield deployments, most prominently during the Abkhazian and South Ossetian Wars.

Still, the base Su-27 design lives on through dozens of modernized spinoffs and variants, including the Chinese-licensed J-11. The Su-27’s most complete overhauls were the Su-35 and the later Su-35S, the latter of which uses a much more powerful but also more efficient AL-41 engine. Other changes brought by the Su-35S include an revamped avionics suite and reduced radar cross section.

From prior GPS jamming to conventional forces buildup, this incident is the latest in a long line of Russian-Western military tensions in the Baltic Sea Region.