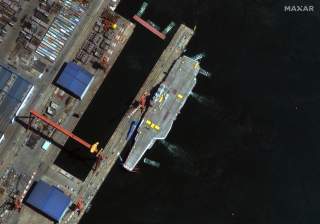 No. And Yes. Should the People’s Liberation Army (PLA) consummate its maritime strategic aims, aircraft carriers might well be superfluous for defense of the Western Pacific and China seas. But that’s a feature in Chinese fleet design, not a bug. Carrier task forces unneeded for local defense are available to carry the Chinese flag into faraway demesnes, projecting influence far beyond East Asia. Resources sluiced into building flattops have not gone to waste.

A division of labor between elements of the PLA Navy has come into view. Beijing entertains the interim goal of “sea denial” in Pacific waters and skies rippling as far from mainland coastlines as possible. That would keep opponents from making effective use of vital waterways. Ultimately PLA overseers hope to “command” the China seas and a protective belt of the Pacific, wresting complete, permanent control from the U.S. Navy and allied fleets such as the Japan Maritime Self-Defense Force or Taiwan Navy.

If everything breaks their way, they may not even need a fleet of hulking warships for Pacific denial or command.

In sea-power evangelist Alfred Thayer Mahan’s language—all the rage among strategic thinkers in Communist China—the PLA Navy, in concert with supporting shore-based arms of maritime might, will sweep the enemy’s flag from seaways China’s leadership aspires to dominate. At most it will permit a hostile navy to appear “as a fugitive,” accomplishing little of note. Such “overbearing power” confers control of “the great common” that is the briny main—granting wielders of that power the prerogative to close nautical thoroughfares to hostile military or merchant shipping.

Says Mahan, naval commanders seize maritime command by amassing superior firepower at places on the map at times when it’s needed to cow or defeat an antagonist. A fleet must be configured to “take the sea, and to fight, with reasonable chances of success, the largest force likely to be brought against it.” Were he among the quick today, when precision-guided ordnance can strike hundreds of miles out to sea, the historian would doubtless amend his “broad formula” for sizing fleets to accommodate the missile age.

The struggle for nautical mastery is no longer a matter purely for battle lines blasting away at each other on the high seas. Land power can be sea power.

Back to PLA Navy aircraft carriers. Even modest carriers such as China’s are valuable for displaying maritime might as part of peacetime deterrence—especially vis-à-vis outgunned opponents such as Vietnam or the Philippines. And in wartime, adding their modest air wings to the combat mix helps PLA commanders multiply the axes along which foes have to guard against attack—and thus bolsters prospects for Chinese victory at sea. Carrier task forces improve the likelihood that China’s navy can venture seaward with decent chances of success against the mightiest force it’s likely to encounter—presumably the U.S. Pacific Fleet and its Asian allies. Mahan would approve.

Here’s the thing, though: unlike the days of Mahan, the firepower mix no longer need favor “capital ships” like carriers or destroyers. There are other founts of battle power. Diminutive craft such as diesel-electric submarines or patrol craft flitting around the ocean’s surface can loft anti-ship missiles at an enemy fleet as easily as can a carrier-borne warplane or major surface combatant (albeit in lesser numbers per platform). Indeed, combining swarms of small, light, inexpensive missile-armed craft with shore-based air and missile power is central to the PLA’s “anti-access/area-denial” strategy, a.k.a. A2/AD.

Doesn’t that reduce China’s prized surface navy to a wasting asset? Only if Beijing isn’t venturesome with its extraregional diplomacy and strategy. That doesn’t appear to be the case judging from its meteoric progress toward establishing a serious presence in important theaters—chiefly the Indian Ocean region and the Persian Gulf, an inlet in the Indian Ocean crucial to China’s energy security and thus economic well-being. The more of the surface navy Chinese leaders can spare from A2/AD duty close to home, the more vibrant an expeditionary fleet they can dispatch to remote recesses of the Indian Ocean—such as Djibouti, home to China’s first overseas military outpost, or Gwadar, the Chinese-bankrolled seaport in western Pakistan that flanks the approaches to the Gulf.

Some of the PLA’s A2/AD weaponry can reach into the Indian Ocean from Chinese soil, helping Beijing set the agenda there. Still, the PLA Navy will bear a bigger share of the burden in South Asia than in maritime East Asia. Why the disparity? The Australian sea-power scholar Ken Booth breaks down navies’ functions into three basic categories: diplomatic, police, and military duty. An anti-ship ballistic missile fired from China is optimal for Pacific A2/AD. It has something to contribute in the Indian Ocean but is a suboptimal implement for transacting diplomacy, scouring the sea for lawbreakers, or facing down competitors such as the Indian Navy on India’s home ground. Carrier air power, then, retains its value for expeditionary missions—especially those that unfold beyond the A2/AD safety blanket and out of reach of PLA land airfields.

Flattops, in other words, could prove useful in the extreme for extraregional errands. A century ago Mahan’s friend and sea-power confidant Theodore Roosevelt espied the proper relationship between coastal defense and an oceangoing battle fleet. In 1908 the president sketched a division of labor at the “Battleship Conference” at the Naval War College. Shore gunnery, maintained TR, should operate in tandem with small torpedo craft to ward off seaborne assault. Artillerymen and torpedomen would safeguard U.S. harbors—freeing the U.S. Navy battle fleet to prowl the open sea, prosecuting such missions as Washington deemed worthwhile. A well-conceived strategy, that is, would make the battle fleet a “footloose fleet”—the long arm of American foreign policy away from American seacoasts.

They say politics makes strange bedfellows. So does maritime strategy. Teddy Roosevelt, Alfred Thayer Mahan, and China’s President Xi Jinping are among the strangest. And yet they all grasped the interdependent logic of naval and land operations and strategy, and they all held capital ships in high regard as the chief repository of bluewater sea power. Does China need aircraft carriers? You can bet all three oddfellows would say: No at home; but Yes far away.