Does Israel Now Have the Best Air Defense Systems in the World? 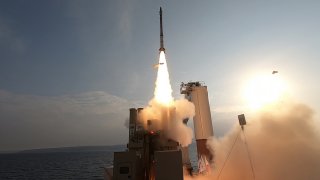 In the lead-up to the Jewish holiday of Hanukkah, a series of Israeli vessels took to sea to prepare for an unprecedented air-defense system test. Using advanced targets meant to resemble cruise missiles, drones and ballistic missiles Israel deployed its multi-layered air defense in a test designed to show all its systems work together.

The Israel Missile Defense Organization (IMDO), of the Directorate for Defense Research and Development in the Ministry of Defense, together with the US Missile Defense Agency (MDA) said this week they had “successfully completed a series of live-fire intercept tests of the David’s Sling weapon system, against threat-representative cruise and ballistic missiles.” The test also demonstrated the interoperability of the multilayer air defense mechanism using Iron Dome and Arrow air defense systems. Israel’s Ministry of Defense said this “this indicates that the systems will be capable of intercepting threats simultaneously during conflict.”

These tests are the sum of everything Israel has been working on since the 1990s to perfect a shield against missiles and other threats. The United States and Israel worked closely on the Arrow and David’s Sling programs. The Iron Dome system, which Israel deployed ten years ago against rocket fire from militants in the Gaza Strip, has been the most often used of Israel’s systems. Recently Israel delivered one Iron Dome battery to the U.S. Army and a second will be delivered soon. Iron Dome can be used against short-range rockets, missile mortars and drones. Now Israel’s Rafael Advanced Defense Systems says the recent tests “demonstrated the capabilities of the Iron Dome in intercepting a variety of threats including UAVs and cruise missiles.” This is a major step for Iron Dome.

The reason cruise missiles and drones loom large in the list of threats is that Iran used cruise missiles and drones to attack Saudi Arabia’s Abqaiq facility in September 2019. Tal Inbar, an expert in missiles and air defense said “the latest series of tests carried out by Israel on its active defense systems—Iron Dome and David Sling—has been used, among other things, to test the effectiveness of defense against new threats including cruise missiles and attack drones. Considering recent attacks against Saudi Oil and Gas infrastructure carried out by the Houthis in Yemen, which used Iranian origin weapons—emphasized the need to evaluate against such an attack scenario against Israeli facilities.” He notes that different scenarios were used to put all the components of the active defense to the test, from radars to control centers and the interceptors. “Israel’s multilayered active missile defense architecture constantly improves and adjustments are made on a constant basis, in light of the ever-changing nature of threats.”

This precise, complex attack involved dozens of drones and cruise missiles that flew for hundreds of miles. Iran has also deployed drones and missiles to Syria to threaten Israel. In 2018 a drone flew into Israeli airspace from Syria. Salvos of rockets have been launched and Israel has conducted airstrikes against Iran in Syria. Israel has sophisticated systems, such as the F-35 stealth fighter jet, that it has been using against threats. However offensive capabilities are one thing, but Israel knows that in any future war it needs multi-layered air defense against a variety of threats. This is because Hezbollah in Lebanon, which is backed by Iran, has an estimated 150,000 missiles and it has been developing precision-guided munitions. This massive arsenal is a major threat for Israel. While Iron Dome has proven successful for ten years, David’s Sling and Arrow have only been operationally used for the first time in the last three years.

Israel rolled out a new multiyear plan called Momentum this year, which was designed to make the Israel Defense Forces even more lethal and precise in their warfighting abilities. This means not only concentrating on systems like the F-35 stealth fighter jet and deploying multilayered air defense but also employing more special forces and better intelligence. To give Israel time to strike precisely at enemies near and far the country needs air defense to keep civilians safe while the army and air force land a knock-out blow. Israel’s Momentum also saw the creation of a special command headquarters to focus solely on the “third circle” threat of Iran. In addition reports in 2018 and 2019 indicated Iran was transferring ballistic missiles to Iraq. Add all this up and the integrated air defense Israel showed off in December is all about proving how capable the country is.

This matters because a new U.S. administration comes into office in January and Iran may be preparing new threats against Israel. Iran has accused Israel of killing one of its top nuclear scientists and Hezbollah blamed Israel for killing one of its members in July.

The recent tests were carried out at sea for safety reasons. The Israeli navy put the air defense on their ships. The Iron Dome has a sea version called C-Dome. David’s Sling was also put on a ship. David’s Sling is similar to the U.S. Patriot system and has an interceptor that is designed for confronting complex medium-range threats. The Arrow system is designed for the highest level long-range ballistic missile threats.

Israel says “the series tested the capabilities of a new and advanced version of the David’s Sling weapon system, and included a number of scenarios simulating future threats.” All of Israel’s major companies were involved in constructing the technology for the tests. “Rafael is the prime contractor for the development of the David’s Sling weapon system, in cooperation with U.S. Raytheon. IAI's Elta division developed the MMR radar, and Elbit Systems developed the Golden Almond Battle Management Center,” Israel said.

Israeli defense minister Benny Gantz commended the successful test. “This is one of the most advanced air defense mechanisms in the world and it protects the state from threats near and far. He thanked Israel’s American partners for their support. Head of the Israel Missile Defense Organization in the Ministry of Defense, Moshe Patel said the new tests were unprecedented in their complexity.

The tests involved integrating all the systems into a common air picture so that air defenders can employ all the systems at the same time and even use multiple interceptors against threats. This is necessary because the number of threats has increased in recent years. Israel has seen the same threat problem at sea, which motivated the country to prepare to pack its new Sa’ar 6 corvettes with the latest technology. This is a world now of the most advanced technology in terms of sensors and seekers, where countries are always trying to be one step ahead of one another. For instance, it is difficult to stop cruise missiles and drones because they fly at low altitude and they are slow. Some munitions can also maneuver. That makes things more difficult for radar and for interceptors. Airspace is simply far more complex today than just a few years ago. The recent conflicts in Syria, Libya and in Azerbaijan against Armenian forces in Nagorno-Karabakh have shown how air defense and armed drones have come to dominate the battlefield. Often sophisticated air defense has not been able to stop drones or what are called loitering munitions, a kind of kamikaze drone. Israel also makes these types of munitions, so Israel not only has advanced air defense but some of the best precision munitions. It also has very good electro-optical surveillance and drones that are using persistent surveillance of areas and using artificial intelligence to identify threats.

On this new digital battlefield, Israel may be fielding the most advanced air defense systems ever put together into a multi-layered format in this manner. Israel’s need to do this was necessitated by complex threats but those threats are also being used against other states in the region, which means Israel’s systems have regional and global ramifications for air defenders.