Don’t Send This Aircraft Carrier to the Persian Gulf 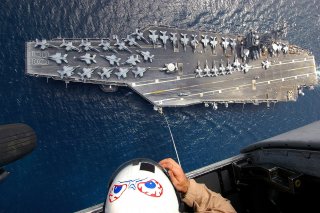 That’s my advice to senior decisionmakers who appear set on deploying the nuclear-powered aircraft carrier USS Dwight D. Eisenhower to the Persian Gulf region just six months after the flattop completed an epic seven-month cruise during which the crew broke all records for consecutive days at sea. Crewmembers spent 205 days at sea, enjoying zero R&R time in port as the ship skirted the pandemic.

David Larter relates the story of Eisenhower’s impending “double-pump” deployment over at Defense News. Doubling up is a bad idea for material, human, and strategic reasons.

First the material and human dimensions. The U.S. Navy’s “Optimized Fleet Response Plan” regulates the rhythm of overhaul, training and certification for sea, and deployment on foreign station or in local waters. Each cycle ostensibly spans 36 months. Ships and formations spend 14 months undergoing maintenance and training and are available for deployments of various types during the ensuing 22 months. Then the next round of maintenance commences.

And onward the cycle turns. That’s the theory behind the Fleet Response Plan. Trouble is, machinery—especially aging machinery that has been run hard—has a habit of refusing to obey the best-laid plans.

For proof look no further than Eisenhower’s recent history. The ship is now 43 years old, the end of its service life bearing down on it. In 2017 Ike put into Norfolk Naval Shipyard for 6 months of repair work and upgrades. The maintenance period more than tripled in length as engineers set to work and unearthed more and more problems. Nor was the overrun an aberration. In 2013-2015 naval overseers were forced to extend the vessel’s previous major overhaul from 14 to 24 months.

That’s a pattern that seems to be repeating itself.

Before 2013 Eisenhower had deployed four times in four years, with little respite for upkeep. During the 2017-2019 yard period the carrier’s skipper, Capt. Kyle Higgins, likened the ship to a “classic car” that goes into the shop to get one thing fixed, only to have mechanics discover a cascade of problems that also need work. More work means more expense, more time in the shop, and less time on the road.

Seldom is an antique the primary family car. And if it is, its owner had better expect to sink lots of sweat and cash into keeping it running—and for it to be unavailable much of the time while undergoing repair. Capt. Higgins hit on a fitting metaphor for Nimitz-class carriers in general and Eisenhower in particular. Pentagon grandees must husband the carrier fleet’s service life—ordering back-to-back deployments only in times of extreme need.

Is this such a time? It’s hard to see why.

Which brings us to strategy. Gen. Kenneth McKenzie, the commander of the U.S. Central Command, has clamored for more carrier presence in the Persian Gulf as a deterrent to Iranian mischief. Now, it’s doubtful how much deterrence a carrier expeditionary group exerts vis-à-vis Tehran, which makes sponsorship of militant groups like Hezbollah and the Houthis the long arm of its foreign policy.

What a carrier task force can do against irregular forces and their Iranian patrons that ground-based air forces can’t do is unclear. But grant Gen. McKenzie the point for the sake of discussion. It makes sense from a Central Command standpoint to keep a carrier on station in the Gulf as regularly as possible, if for no other reason than to discourage overt military action against friendly Arab states.

But does it make sense for the United States? No. Sending the Eisenhower strike group back out is the latest symptom of strategic incontinence that has come to afflict officialdom in Washington DC. Regional military commanders demand forces and the Pentagon all too often obliges. In turn the armed services strive to meet the demand—frequently at the expense of matériel and sailors, soldiers, and airmen.

It falls to national leaders to reimpose self-discipline. This is their writ. At bottom strategy is about setting and enforcing priorities. The Obama administration inaugurated a shift toward new strategic priorities in 2012, setting America’s “pivot” or “rebalance” to Asia in motion. The rise of China to military might had come to outrank turbulence in the Middle East on Washington’s list of priorities.

The rebalance entitled the Asia-Pacific to first claim on U.S. military resources.

Few in the Trump administration credit their predecessors for realigning U.S. priorities, but they have adopted the rebalance while jettisoning the label. The U.S. Pacific Command is now the Indo-Pacific Command, signifying the importance of the Indian Ocean alongside the Pacific. Strategic directives make it plain that long-term strategic competition is upon us and that the principal competitors the United States confronts are China and Russia.

And Iran? Well, strategic master Carl von Clausewitz cautions against diverting resources from the main effort—the effort to obtain what senior leaders have designated as top priorities—unless some secondary undertaking promises exceptional reward and will not place the main effort at risk. He defines risk in terms of resources: a combatant must command “decisive superiority” in resources in the main theater to justify siphoning some off into an endeavor of lesser importance.

In other words, do not place what matters most in jeopardy to acquire something that matters less.

Successive presidential administrations have demoted the Persian Gulf region to secondary status while elevating the Western Pacific and Indian Ocean. So apply the Clausewitzian calculus to the naval question. Does operating carriers in the Gulf region offer exceptional strategic reward? Are U.S. maritime forces decisively superior to Chinese and Russian forces in their own backyards? And if U.S. forces are not decisively superior to their major competitors, by what logic should Washington run grave risks for the sake of deterring Iran, a lesser contender?

Think about the opportunity costs. Constant deployment risks running the U.S. Navy’s aircraft-carrier fleet—the core of its combat power—into the ground. The opportunity cost of double-pumping Dwight D. Eisenhower—and in all likelihood seeing the flattop laid up again for a protracted yard period afterward—might be having insufficient carrier-based firepower on hand to prevail in the Taiwan Strait or the East China or South China seas, the primary theaters of competition or warfare. That turns strategic logic upside down.