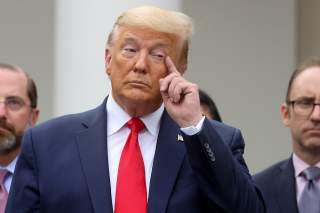 The arrival of Wuhan coronavirus in the United States seemed to give Democrats and the liberal media something that previously eluded them: an economic and leadership crisis that could undercut President Trump’s strongest arguments for reelection.

It was going to be Trump’s Hurricane Katrina and financial crisis rolled into one. But there are early signs that their dream may not come true, despite mistakes by Trump’s economic team and a pathetic capitulation to congressional Democrats on recovery legislation that will deepen a recession.

Early in the crisis, Trump halted travel from China, where the disease originated. He followed suit this week with a ban on most travel from Europe, which is the new epicenter of the outbreak.

While that action spurred significant stock market declines, a strong presidential press conference on Friday reversed the trend. The presser, which included CEOs from healthcare and retail companies that are crucial to managing the crisis, finally got the message across that Trump has the government and private sector going full speed to minimize the pandemic.

Furthermore, while the media is focused on the worsening outbreak in Europe, where governments failed to implement travel bans, the real story comes from the advanced, free nations of East Asia. In Taiwan, Japan, Singapore, and even hard-hit South Korea, the worst of the crisis appears to be slowly winding down. As with the United States, each moved rapidly to stop Chinese travelers and has a coordinated government and private-sector response.

Every outbreak has a bell curve of initial infections and mortality peaking and giving way to diminishing new infections and patients who recover. Those nations are now over the hump, and their rapid progress implies the United States could have a similarly reasonable progression.

Another factor working to Trump’s long-term advantage is the vast overreaction in the United States, especially in the media hubs of Washington, DC and New York. Reporters with little understanding of the economy or financial markets have likened the situation to the 2008 financial crisis.

Their reporting helped spur a freak-out that tanked a stock market ripe for correction. The market was overvalued as the crisis began, with a bloated S&P 500 price-to-earnings ratio of twenty-six. At the close of trading on Friday it stood at a historically more reasonable ratio of twenty. Trump will benefit from almost-certain market recovery and beating dire expectations for the disease’s progression.

But he isn’t out the woods yet.

Trump’s previously unquestionably good economy now requires a more complex sell to voters: unemployment is still low if rising, wages are higher than when he took office, and we are winning the trade wars.

The package they agreed has almost exclusively Democrat priorities like handouts for states for prolonged unemployment payments despite a labor shortage and an expensive new worker-leave entitlement. The latter provision victimizes small and medium-sized businesses exclusively and will actually further harm companies impacted by the virus and workers already facing layoffs or fewer hours. There are tax credits to offset some of extra cost being foisted on small businesses, but they are limited, take time to claim, and create a massive new paperwork burden. The result will be accelerated layoffs.

In effect, Mnuchin has gotten Trump to sign off on a Democrat wish list for new entitlements for little in return that he couldn’t have done without Congress.

Frankly, the capitulation is reminiscent of Pelosi crushing George W. Bush’s Treasury Secretary, Hank Paulson, who actually got down on one knee to beg for a Wall Street bailout in 2008. Except Paulson faced a genuine financial crisis; Mnuchin capitulated to Pelosi on a day the stock market was up nearly 2,000 points.

Federal Reserve Chairman Jerome Powell also seems lost at sea, and another economic figure in the administration, Larry Kudlow, is best known as an aging cheerleader for the stock market regardless of reality. Propagandists aren’t soothing in a crisis; straight-shooters are.

It would be best if Trump replaced the whole team. He should forego finance guys from Wall Street and turn to CEOs with real-economy expertise who grasp how to help workers and affected industries, especially small and medium-sized businesses that will be impacted hardest by the crisis and cost of new entitlements.

Meanwhile, Democrats other than Pelosi seem diminished. Joe Biden, Trump’s likely opponent in November, first criticized Trump for stopping flights from China, and then flipped to criticizing him for doing too little. Furthermore, due to his near-daily gaffes, Biden hardly jumps to mind as a better alternative to Trump in a crisis, especially as the administration achieves control over the situation.

In fact, there is a very real risk to Democrats that Trump, contrary to all predictions, will come through this crisis as a calm, collected, competent leader who is comfortable exercising command of the government and private sector in a national emergency. If it sticks and his Treasury secretary doesn’t tank the economy, this unanticipated addition to his qualifications would appeal to more than just his Republican base.

U.S. President Donald Trump pauses during a news conference where he declared the coronavirus pandemic a national emergency in the Rose Garden of the White House in Washington, U.S., March 13, 2020. REUTERS/Jonathan Ernst TPX IMAGES OF THE DAY