Is Donald Trump Going to War with Fox News? 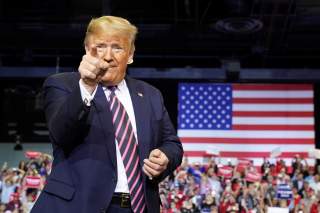 President Donald Trump is continuing his drive-by tweeting of Fox News personalities who he feels are insufficiently deferential to the administration. This comes on the back of the president’s acrimonious relationship with the press, both conservative and liberal, that began when he first announced his campaign in 2015.

The latest snap came when A. B Stoddard, an editor and columnist at RealClearPolitics, appeared on Fox host Neil Cavuto’s show to discuss Wednesday’s Democratic debate. Stoddard compared Michael Bloomberg’s disastrous performance with how Trump appeared in some of his own 2016 appearances. The President appears to have taken great offense at the remark.

“Could somebody at @foxnews please explain to Trump hater A.B. Stoddard (zero talent!) and @TeamCavuto, that I won every one of my debates, from beginning to end. Check the polls taken immediately after the debates. The debates got me elected. Must be Fox Board Member Paul Ryan!” Trump tweeted yesterday.

From 2011 on, Donald Trump had made several guest appearances on Cavuto’s show and tweeted about them positively. That didn’t stop the hostility from continuing, however.

“So @TeamCavuto has very bad ratings on @foxnews with his Fake guests like A.B.Stoddard and others that still haven’t figured it all out,” tweeted Trump this afternoon. “Will he get the same treatment as his friend Shepherd Smith, who also suffered from the ratings drought?”

The Fox host with whom President Trump has the longest-running beef is Shepard Smith, who hosted programming on the network for nearly two decades prior to his abrupt resignation in October 2019. President Trump’s most common reference to him, both before and after his departure, has been the taunting question “How’s Shep Smith doing?”

Cavuto, who hosts two shows on Fox News and one on Fox Business, saw his ratings drastically improve over the course of 2019. He regularly outperforms his timeslot rivals at MSNBC and CNN.

Donald Trump’s complicated relationship with Fox News extends to the whole network, not just individual personalities, according to the president. “From the day I announced I was running for President, I have NEVER had a good @FoxNews Poll. Whoever their Pollster is, they suck. But @FoxNews is also much different than it used to be in the good old days. With people like Andrew Napolitano, who wanted to be a Supreme…Court Justice & I turned him down (he’s been terrible ever since), Shep Smith, @donnabrazile (who gave Crooked Hillary the debate questions & got fired from @CNN), & others, @FoxNews doesn’t deliver for US anymore. It is so different than it used to be. Oh well, I’m President!” he said in October 2019.

Former Superior Court Judge Andrew Napolitano is a regular Fox contributor and guest host who was friends with Trump for years prior to his presidency. Trump claims Napolitano asked to be appointed to the Supreme Court, which the judge denies (in Napolitano’s telling, it was Trump who asked him).

Donna Brazile worked as Al Gore’s campaign manager in 2000 and worked as a CNN analyst before it was revealed that she passed along debate questions to presidential candidate Hillary Clinton in 2016. After she was fired, she was hired by Fox contributor.

Despite his criticism of the network, President Trump has done more than sixty interviews with Fox since he took office, while he hasn’t appeared CNN or MSNBC since mid-2016.