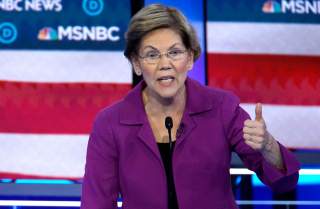 Last night former New York City Mayor Michael Bloomberg made his first appearance on the 2020 Democratic debate stage to optically disastrous results. The candidate appeared unprepared to respond to expected attacks on his past personal conduct towards women.

As predicted, Elizabeth Warren was on the offensive throughout the debate, launching direct verbal attacks on her opponents in an attempt to resuscitate her dwindling campaign ahead of Super Tuesday. At the opening of the debate, the Massachusetts Senator interrupted the first moderator question to set the tone for the night.

“So, I'd like to talk about who we're running against, a billionaire who calls women ‘fat broads’ and ‘horse-faced lesbians.’ And, no, I'm not talking about Donald Trump. I'm talking about Mayor Bloomberg,” Warren said. “Democrats are not going to win if we have a nominee who has a history of hiding his tax returns, of harassing women, and of supporting racist polls like redlining and stop and frisk.” She followed this statement by assuring viewers she would still support Bloomberg if he was the Democratic nominee.

The kill shot came later. When asked about his behavior in the workplace and the subsequent lawsuits, Bloomberg said his company had a no-tolerance policy for sexual harassment, and he employed many women, some of whom “have big responsibilities.”

“I hope you heard what his defense was,” responded Senator Warren. "’I've been nice to some women.’ That just doesn't cut it. The mayor has to stand on his record. And what we need to know is exactly what's lurking out there. He has gotten some number of women, dozens, who knows, to sign nondisclosure agreements both for sexual harassment and for gender discrimination in the workplace. So, Mr. Mayor, are you willing to release all of those women from those nondisclosure agreements, so we can hear their side of the story?”

Bloomberg acknowledged he had “very few,” nondisclosure agreements, but when pressed by Warren, he did not say how many. “None of them accuse me of doing anything, other than maybe they didn't like a joke I told,” he said as the audience groaned. “And let me just—and let me—there’s agreements between two parties that wanted to keep it quiet and that's up to them. They signed those agreements, and we'll live with it.”

Bloomberg insisted that the agreements were consensual, and resisted pressure from both Warren and former Vice President Joe Biden to release the women in question from legal penalty if they spoke publicly.

After the debate, Bloomberg’s campaign released a statement regarding his performance. “It took him just 45 minutes in his first debate in 10 years to get his legs on the stage. He was just warming up tonight.”

The billionaire former mayor has spent over $300 million of his own money on his presidential campaign thus far.