Donald Trump vs. the Coronavirus Begins at 6PM Tonight 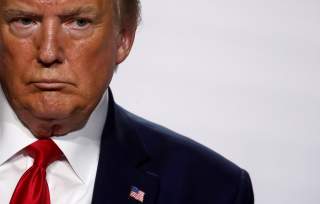 Fear of an eventual Coronavirus outbreak has increased in the United States since the Center for Disease Control and Prevention announced yesterday that the public should prepare itself. This has resulted in a continued decline in the stock market, more people making emergency grocery store purchases, and the Trump administration defending itself against criticism for its prevention efforts.

The disease, which started in China, spread outside the Middle Kingdom’s borders this month. There are now outbreaks in Iran, South Korea, and Italy, with more expected.

"It's not so much a question of if this will happen anymore but rather more a question of exactly when this will happen and how many people in this country will have severe illness," announced Dr. Nancy Messonnier, who is the head of the National Center for Immunization and Respiratory Diseases at the CDC. Messonnier said Americans should be prepared for a “significant disruption of our lives” which includes making alternative plans for children’s schools, food shopping, and possibly work.

“I agree with the assessment that we are likely to see outbreaks of COVID-19 [coronavirus] in the United States. The virus seems to be very contagious, and while the outbreak is slowing down in China, it is growing in other areas,” said Dr. Brittany Kmush, Assistant Professor of Public Health at Syracuse University.

This preparation for disruption caused the stock market to go down further on Tuesday. Combined with Monday’s decline, the stock market saw a total loss of value of 6%. This drop ebbed slightly on Wednesday morning, with a 1% gain, but the market is still plagued by uncertainly. This is the largest stock drop in the past two years.

The President has taken to Twitter, his preferred medium, in an attempt to assuage fears and keep the economy steady. “CDC and my Administration are doing a GREAT job of handling Coronavirus, including the very early closing of our borders to certain areas of the world. It was opposed by the Dems, “too soon”, but turned out to be the correct decision. No matter how well we do, however, the…Democrats talking point is that we are doing badly. If the virus disappeared tomorrow, they would say we did a really poor, and even incompetent, job. Not fair, but it is what it is. So far, by the way, we have not had one death. Let’s keep it that way!” he tweeted. In a separate tweet, Donald Trump blamed the media for hyping up the severity of the disease.

President Trump announced that today at 6pm he would have a news conference at the White House to address the coronavirus, with CDC officials present. The number of confirmed cases of coronavirus in the United States has grown to 57, with most of the individuals catching it overseas and arriving infected. There have been no deaths.