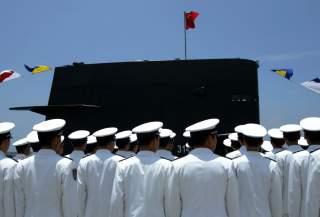 Key point: Beijing is building out a first-class navy and that includes submarines. Moreover, because submarines are harder to find, they pose a significant threat.

The Chinese navy is close to building up one of the world’s most powerful submarine fleet, according to the 2019 edition of the U.S. Defense Department’s annual report on Chinese military developments.

The U.S. Navy is struggling to stay ahead.

The People’s Liberation Army Navy is “the region’s largest navy, with more than 300 surface combatants, submarines, amphibious ships, patrol craft and specialized types,” the report explains. “It is also an increasingly modern and flexible force.”

Beijing deploys its submarines in order to “achieve maritime superiority within the first island chain” that runs from Japan to The Philippines “as well as to deter and counter any potential third party intervention in a Taiwan conflict.”

To that end, China by mid-2019 has acquired six nuclear-powered attack submarine, or SSNs, and 50 conventional attack submarines, or SSs. “The speed of growth of the submarine force has slowed and will likely grow to between 65 and 70 submarines by 2020,” according to the report.

The Chinese undersea build-up is part of a wider, regional submarine expansion. "Potential adversary submarine activity has tripled from 2008 levels, which requires at least a corresponding increase on the part of the United States to maintain superiority," U.S. Navy admiral Philip Davidson said in a March 2019 Congressional testimony.

In December 2016, the U.S. Navy announced it needed 66 attack submarines in order to meet regional commanders' needs. But in early 2019 the fleet had just 51 attack boats. And that number is set to fall.

Not only would China likely be able to deploy more submarines to the western Pacific than the United States, but the Chinese boats also might be better-suited than the American vessels are to operations in the region's shallow, crowded littoral zones.

In order partially to compensate for its growing disadvantage in submarines compared to the Chinese fleet, the U.S. Navy is experimenting with new, more efficient ways of supporting its subs, and also is buying robotic submarines that could reinforce manned boats on certain missions.