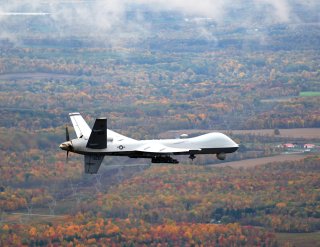 In response to the explosion of commercial drones, the Federal Aviation Association (FAA), the U.S. Military, and major defense industry players are trying to establish basic organizational parameters related to airspace deconfliction. The proliferation of unmanned systems of all sizes has caused chaos, leading authorities to look for ways to allow appropriate drone use and deconflict an increasingly crowded airspace.

Raytheon, for instance, is developing an artificial intelligence (AI) cloud-technology system that uses advanced radar to enable an “end-to-end” system for deconflicting the airspace and securing low-altitude drone flight. The technology uses Active Electronically Scanned Array radar to identify potential risks, which it then analyzes in a central AI-enabled processing location.

An AI-enabled system, for instance, could gather massive streams of data from disparate sources, bounce them off a vast database to organize information, perform analytics, and offer solutions. AI can also analyze variables such as weather, navigation, or sensor fidelity and range in relation to one another, allowing the system to offer optimal “recommendations” to human controllers.

“We are working on enabling the infrastructure that allows uncrewed systems to fly beyond the visual line of sight, on-demand. That would include a surveillance capability and the ability to provide value-added information related to things like the status of the airspace, weather, current visibility, winds, or a need to track a vehicle,” Kip Spurio, technical director of air traffic systems at Raytheon Intelligence & Space, told the National Interest in an interview.

Technical elements from some of Raytheon’s existing Air Traffic Control Systems are informing the maturation of this new end-to-end system. One of these elements is a technology called the Multi-platform Application Re-hosting Solution, or MARS. MARS organizes disparate pools of data and sensor information into a single screen for operators in order to ease the cognitive burden, increase decision-making efficiency and consolidate separate streams of information.

Standard Terminal Automation Replacement System, or STARS, is another Raytheon technology being used across air traffic control systems to provide sequencing guidance for arriving and departing aircraft. Part of the modernization effort for STARS aligns with Spurio’s focus on the new end-to-end system; it’s oriented toward building upon an established hardware and software baseline. Part of the concept is to upgrade and modernize integrated software without fully re-architecting a hardware system, thus aligning the technical standards and internet protocol.