Raytheon’s Revolutionary Radar Could Extend the Life of Older Aircraft 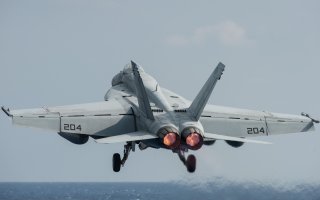 Raytheon is making a major bet on the success of a “revolutionary” technology that could permanently change the face of the military hardware industry.

GaN, or gallium nitride, is a hard semiconductor material that can withstand much higher voltages and temperatures than the silicon that’s typically used for manufacturing computer chips. Raytheon notes that GaN-based systems are not just technically better, but offer concrete battlefield advantages. “Radar performance is all about power—the more power, the more capability,” Thomas Shaurette, vice president of F/A-18 and Global Strike programs in Secure Sensor Solutions at Raytheon Intelligence & Space, told the National Interest. “Think of GaN as a lightweight supercharger. With GaN, we can achieve higher levels of performance while decreasing power demands from the aircraft and reducing weight. So now, aircrews can operate at greater standoff ranges, engage earlier and extend their engagement timelines.”

According to their proponents, GaN-based systems are an efficiency game-changer, capable of putting out exponentially more power and sustaining a greater level of performance in the most demanding military tasks. Shaurette sees a wide applicability for GaN technology. “The benefits of GaN—greater engagement ranges, improved accuracy, lower weight and power requirements—are extendable to a wide range of fighters,” he said. Though he did not offer specific examples, Shaurette added that there is “a growing market for GaN-based AESAs as there’s a resurgence in interest for light attack aircraft, the recapitalization and continued production of fourth-generation fighters, and the emergence of sixth-generation aircraft.”

Raytheon has long been one of the major market players in the GaN space, pouring significant investments into the technology as early as 1999. In recent years, the company developed a GaN AESA radar for the Patriot air and missile defense system. It did so in record time, with a test period that ran twice as short as similar programs—no small feat, given that military-grade GaN technology is notoriously difficult to work with and expensive to develop. The company is looking to further extend GaN technology across its radar portfolio, with options including jamming systems and tactical AESA’s.

Shaurette says one of the reasons for Raytheon’s success is its in-house facility in Andover, Massachusetts. “Raytheon has invested more than $300 million to develop GaN capabilities. We are the only major aerospace and defense company with its own foundry that builds GaN integrated circuits. That allows us to better control cost while also reducing risk to schedule and the customer,” he added.

The bulk of Raytheon’s messaging has been focused on keeping fourth-generation systems relevant through the 2030s, but Shaurette told the National Interest that Raytheon’s long-term plans for GaN technology extend well into the next generation. “That’s the beauty of GaN—it can be inserted into legacy fourth-generation fighters, as well as outfit sixth-generation fighters,” he said. “There is a continued need to modernize and sustain legacy aircraft, as well developing tech for next-generation platforms—GaN is the technology able to transverse this spectrum. We, at RTX, have only scratched the surface when it comes to harnessing the game-changing power of GaN technology. We envision GaN playing an important role in upgrading high-powered radio frequency and electronic warfare systems, as well as a host of other military applications.”