Drones Are Wreaking Havoc on the Russian Military in Crimea 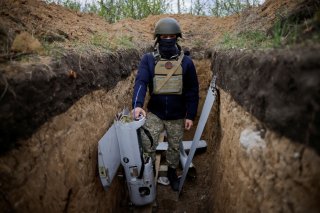 Local authorities announced that Russian air defenses downed an unmanned aerial vehicle (UAV) near Sevastopol, the latest in a string of reported attacks on Russian military assets in Crimea over the past month.

"Air defense systems were activated in Sevastopol again. According to preliminary data, a drone was downed near Cape Khersones," Russian-appointed Sevastopol governor Mikhail Razvozhayev said on Sunday, according to Russian state news outlet TASS. Cape Khersones is located around nine miles from Sevastopol, the largest city in Russian-annexed Crimea. This attack is the second in less than a week, with Razvozhayev reporting on August 23 that Russian air defense systems shot down several drones off the Crimean coast.

Russia’s Black Sea Fleet headquarters in Sevastopol was rocked by an alleged drone attack on August 20. Footage posted on social media appeared to show a plume of smoke rising over the area where the Black Sea Fleet is based. “I am at the Fleet’s headquarters,” Razvozhayev wrote shortly following the reported strike. “Twenty-five minutes ago, a drone flew into the roof. Unfortunately, it was not shot down… it flew low. There are no victims.”

“The attacks by small drones continue,” wrote Russian-appointed Crimea official Oleg Kryuchkov on Telegram. “The goal is psychological, not military, the payload is minimal and it is impossible to inflict significant damage with it. The best way to help the [Russian] army and navy is to remain calm and report all suspicious people, occurrences, and discoveries to the appropriate authorities.”

The Black Sea Fleet headquarters was previously attacked on July 31—Navy Day in Russia—by a drone carrying a “low-yield explosive,” prompting local authorities to cancel all planned festivities. Those attacks were followed in early August by explosions in Saki airfield near the village of Novofedorivka that destroyed at least seven stationary Russian aircraft. Less than one week later, another explosion in Crimea’s Dzhankoi district reportedly caused several civilian injuries and damaged nearby residential areas.

Russian authorities in Crimea have reported drone attacks regularly over the past several weeks, though these ongoing strikes’ full scope and efficacy remain unclear.

Kyiv has neither confirmed nor denied Ukrainian involvement in any attacks on Crimea. An unnamed Ukrainian official told The Washington Post earlier this month that the Saki airfield attack was the work of Ukrainian special forces, sometimes referred to in Ukraine as “partisans.” CNN reported on Saturday that Ukraine, buoyed by Western training and arms shipments, has effectively adopted a US-developed doctrine to conduct strikes deep in Russian-controlled territory as part of what Western officials and experts have called a “resistance warfare” strategy meant to impose continued costs on a substantially larger and better-equipped Russian military.