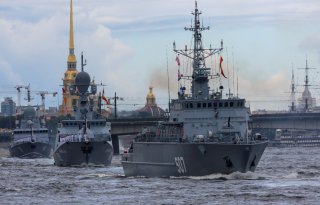 This year’s parade featured forty-seven naval vessels and over forty naval aviation aircraft, according to Russian state news outlet TASS. The parade, which was attended by Russian president Vladimir Putin and Defense Minister Sergey Shoigu, was headlined by the lead ship of the Admiral Gorshkov class of modern frigates, Admiral Gorshkov. Gorshkov will be the first ship to carry Russia’s new 3M22 Tsirkon winged hypersonic anti-ship cruise missile, Putin said in a speech. The Tsirkon missile is reportedly capable of reaching speeds up to Mach 9, or around 6,900 miles per hour, and features an operational range of around 620 miles. The Tsirkon hypersonic missile was one of the six advanced weapons unveiled by Putin during his 2018 annual state-of-the-nation address.

This year’s lineup reflects the Russian Navy’s slow-but-deliberate shift away from the hulking cruisers and destroyers of the Soviet era in favor of a leaner and smaller rapid-response force composed largely of modernized corvettes, frigates, and nuclear-powered submarines.

Navy Day was first established in 1939 as an annual Soviet holiday to “mobilize the working masses around the construction of a Workers’ and Peasants’ Soviet Navy.” Navy Day was canceled in 1980, just under a decade before the Soviet collapse, and reinstated in 2006 by a decree issued by Putin.

Plans to hold Navy Day celebrations in Russian-annexed Crimea were scrapped following reports of a Ukrainian drone attack on the headquarters of Russia’s Black Sea Fleet in Sevastopol. Governor Mikhail Razvozhayev said six Black Sea Fleet employees were injured following the alleged strike, adding that all festivities scheduled on that day were “canceled for security reasons.” The Black Sea fleet’s press service later said the attack was carried out by a makeshift drone carrying a “low-powered” explosive device. Top Ukrainian officials denied any involvement in the incident, dismissing the Russian allegation as a “sheer provocation.”