Russia's Su-24 Truly Is a 'Blast' From the Past 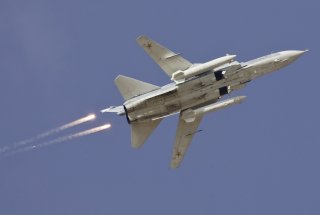 Despite being designed in the mid-1960s, the Su-24 is still in use with a number of militaries today—mostly by Russia and former countries in the Soviet block and other countries that were friendly with the Soviet Union—but also by Iran, given to them by Iraq for safekeeping before the 1991 invasion, and never returned.

The Su-24 is primarily a low-flying, medium-range attack and ground support aircraft. Its similarity to the General Dynamics F-111 Aardvark is no accident—both aircraft were developed at around the same time (although the Su-24 was built as a response to the F-111 Aardvark, thus the F-111 predates the Su-24 slightly). Both airframes have a similar mission profile, and are therefore strikingly similar, in both outward appearance and capabilities.

The Su-24 has a crew of two and uses a side-by-side seating layout, in which the pilot and navigator-weapons systems officer sit side by side in the cockpit, rather than one behind the other, in typical fighter fashion. This design requirement was necessitated by the Su-24’s large radar antennas.

One of the unique characteristics of the Su-24 is its wings, which employ a variable-sweep design, in which the wings can be “tucked in” or spread out, depending on required flight characteristics.

For take-offs and landings, a 16-degree sweep is optimal and gives better lift and control at low speeds. A 35- or 45-degree sweep is ideal for normal flight (contingent on altitude), and 69 degrees is for high-speed, low-altitude flight.

With the Su-24, the Soviet Union achieved a day-and-night, all-weather capable attack aircraft, due to onboard ground following radar that could automatically maintain the Su-24’s altitude in order to remain below enemy radar.

A look at the Sukhoi company website explains: “the T-6 [Su-24 prototype] was the first tactical aircraft in the USSR to provide round-the-clock and all-weather use. This was achieved thanks to the installation of the PNA “Puma”, which included the Orion-A dual-band sighting radar and the “Relief” specialized radar designed to provide flight automation with enveloping the terrain at low and very low altitudes.”

This video is a good example of a Su-24 landing, in flight, and taking off.

In 2015, 2 Russian Su-24 operating in Syria as part of Russia’s military presence in the country strayed briefly into Turkish territory. While one of the Su-24s left the area after being contacted by Turkish air traffic controllers, the other did not.

Turkey scrambled two F-16 fighters, one of which fired on the Su-24, shooting the aircraft.  Both the pilot and the weapons officer successfully ejected, although one of the crew members was apparently shot at from the ground by rebel forces and killed.

Another Russian service member died in the subsequent rescue attempt. This was the first time that Russia and a NATO member country came into direct conflict in the Syrian Civil War.

Although being shot down is not exactly a hallmark of an aircraft’s efficacy, for better or worse the Su-24 platform continues to fly on.