Putin Makes a Startling Claim: Russia Is the World's Leader in Hypersonic Weapons 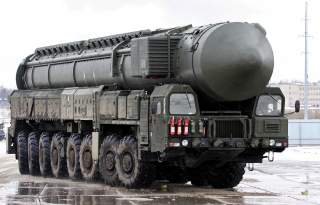 Russian President Vladimir Putin stated at a Defense Ministry meeting held earlier this week that Russia leads the world in hypersonic weapons technology. What are these new Russian weapons, and precisely what type of threat do they pose to the U.S.?

Kh-47M2 Kinzhal is an air-launched, nuclear-capable ballistic missile with a reported maximum effective range of up to 3,000 km when deployed on the Tu-22M3 bomber or its Tu-22M3M successor with a top-flight speed of up to Mach 12 or just under 15,000 kph. Kinzhal, which entered service in the Russian armed forces last year, was test-launched from an MiG-31K fighter at a speed of Mach 10 in the Arctic region earlier this December.

As previously described by The National Interest,  Avangard is a hypersonic boost-glide missile system that combines a high-performance ballistic missile with an unmanned glider vehicle. The result, claims the Kremlin, is a missile so fast and agile that it cannot be reliably intercepted. Russian state news outlet TASS reports that the first two serial Avangard systems entered a service trial period in late 2019.

Sarmat, or “Satan 2,” is a  200-ton, Mach 10, liquid-fuelled intercontinental ballistic missile that was introduced by Putin as a “heavy ICBM” with “practically unlimited range.”  In the same speech, Putin alleged that Sarmat is wholly immune to interception by “any current or prospective” air defense system. Sarmat has suffered a series of delays from 2015 to 2017 stemming from design flaws with the ejection mechanism. Earlier this month, the Russian Defense Ministry confirmed previous reports that Sarmat is scheduled to finish state trials by 2021 and enter service in 2024.

A common sentiment emerges in the way that Russian defense commentators, up to and including the Kremlin, speak about these new weapons. President Putin put it best: from the postwar race to the atomic bomb to the Gorbachev-Reagan arms control talks, that Cold War was characterized by the Soviet attempt to catch up to the U.S. nuclear arsenal. “Now,” said Putin, “we have a situation that is unique in modern history when they are trying to catch up to us. No [other] country has hypersonic weapons, let alone hypersonic weapons of intercontinental range.”

So, where does this leave the United States? In the short term, at a clear strategic disadvantage. Independent experts, including those at the National Defense Strategy Commission (NDSC), have raised concerns that the U.S. military is trailing Russia and China in the development of hypersonic delivery systems. When asked about the U.S. capacity to intercept an Avanguard-launched missile, US Air Force General John E. Hyten, the Commander of US Strategic Command point-blankly told Congress  “we don’t have any defense that could deny the employment of such a weapon against us.”

Earlier in 2019, the Pentagon awarded a contract to Dynetics Technical Solutions to manufacture a set of hypersonic glide body prototypes. But the fruits of those efforts are several years away, with the first units expected no sooner than 2023.

Russian defense experts close to the Kremin are focused less on the first-strike potential of hypersonic missiles, and more on their value as a guaranteed second-strike weapon. A recent report by political scientists Dmitry Suslov and Sergei Kuraganov frames hypersonic weapons as a potential source of nuclear stability, in that they provide the Kremlin with a 10-15 year window of guaranteed nuclear deterrence without the need to engage in a costly, unsustainable buildup of conventional nuclear arms.