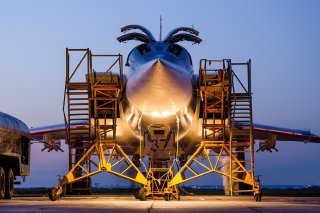 Military expert Yuri Knutov noted that the Tu-22M3M is not only a valuable addition to the air component of Russia’s nuclear triad, but the spearhead of a new power projection strategy to counter American carrier strike groups operating in Russia’s sphere of influence: “The VKS [Russian air force] is undergoing an infrastructure update, in which the Tu-22M3M will have a role to play. The bomber will likely be able to land in most terminals, using them take-off points. Particularly important is the opportunity to transfer the Tu-22M3M to Crimea. American destroyers regularly enter the Black Sea. If tensions sharpen, the proliferation of [Tu-22M3M] bombers on the Crimean peninsula will become a nasty surprise for the US Navy.”  Tu-22M3 bombers were frequently sighted in Crimea and the larger Black Sea area over the coming years, but it appears that the Russian air force is now pursuing a more deliberate policy of long-range power projection in that region.