Report: America Must Be Able to Wage and Win Two Wars at Once (Think Russia or China) 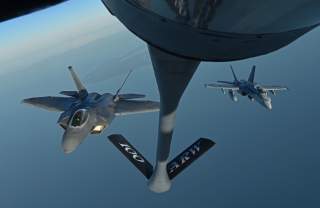 The United States “might struggle to win, or perhaps lose, a war against China or Russia,” concluded a recent report commissioned by the House and Senate Armed Services Committees.

This dire warning about the U.S. “crisis of national security” came as part of a ninety-eight page study from the independent National Defense Strategy Commission. The report identifies a series of strategic and domestic trends that have weakened American global standing over the past decades, and predicts drastic repercussions for American security if immediate steps are not taken to reverse the trajectory of U.S. military decline.

The report maintains that the twin specter of a resurgent Russia and rising China present a geopolitical threat “on a far greater scale than has any adversary since the Cold War’s end.” Another Cold War contrast working against the United States are “aggressive regional challengers.” Regional powers like Kim Jong-un’s North Korea can unilaterally exercise destabilizing effects on American allies, but are especially threatening as strategic proxies of America’s great power competitors.

The authors caution that a formal military alliance between Beijing and Moscow is not a necessary precondition for a war on two or more fronts, where America would fare particularly poorly due to suboptimal military resource distribution. Rather, a war with either Russia or China will cripple America’s deterrent capacity and thus incentivize other hostile powers to exploit American weakness with hybrid if not conventional military action.

The United States retains a fleeting edge in raw military power, but the report notes that modern conflicts are increasingly being waged in the “gray zone” between war and peace where America is being out-innovated by Russia and China in “everything from cyber warfare, everything from strong-arm diplomacy and economic coercion, to media manipulation and cyberattacks, to use of paramilitaries and proxy forces.”

The report stresses that America’s military advantage will, in fact, prove alarmingly fleeting if current trends hold. Not only is the global proliferation of advanced military hardware from WMDs to cruise missiles easier now than at any other time since WWII, but America’s technological supremacy is itself under assault. The United States trails “China and perhaps Russia as well” in hypersonic delivery vehicles and nuclear weapons research, even as its aging AIM-120 AMRAAM Missile system struggles to keep pace with new competitors, including the Russian K-37M and Chinese PL-15.

These trends are enabled by what the report condemns as “disinvestment in defense,” as a result of “decisions made by both major parties.” But the authors go on to stress that what is needed isn’t just more spending, but more effective spending on key security concerns. In particular, the report suggests a long-term investment plan to modernize America’s aging nuclear arsenal to at least match if not exceed the rapid pace of Russian and Chinese innovation.

The report recommends that the Department of Defense recommit to a military that is sized and structured to effectively wage two simultaneous wars. This “two-war force sizing construct” is vital not so much to win a prospective two-front war, as to deter one with a secondary force capable of imposing unacceptable costs on hostile actors seeking to intervene in a major ongoing U.S. conflict with Russia or China.

Against the backdrop of seemingly long-term policy gridlock in Washington, the NDSC report concludes on a stark note of urgency: “The costs of failing to meet America’s crisis of national defense and national security will not be measured in abstract concepts like ‘international stability’ and ‘global order.’ They will be measured in American lives, American treasure, and American security and prosperity lost.”