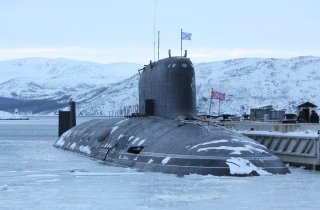 Kazan was expected to be handed over to the navy in February, but the date of its commission has seemingly been pushed back into the third quarter of 2021. This is the latest in what has been a long sequence of delays for Kazan, with the submarine originally scheduled for commission in 2017.

The Yasen class is an effort to phase out Russia’s aging roster of Soviet-era attack submarines, as part of the Russian navy’s long-term modernization plan to transition into a lean, local, rapid-response force largely consisting of advanced submarines and smaller surface vessels. The Yasen-M line is a reboot of the original Yasen submarine, Severodvinsk, laid down in 1993 but commissioned only in 2013. The full extent of the Yasen-M upgrade package remains unclear. There is some indication that the new class will offer better stealth performance, using  low magnetic steel for a reduced magnetic signature and employing a new nuclear reactor for reduced acoustics. With these features, Yasen-M is set to considerably narrow the Cold War-era stealth gap that has long persisted between Soviet and US submarines.  The Yasen class is likely able to trade performance blows with its nearest US competitor, the U.S. Virginia class, though the latter possibly still offers superior acoustics performance. The new submarines will also boast a modernized onboard electronics suite to account for the sixteen-year gap between Severodvinsk and subsequent Yasen vessels.

The news of Yasen-M’s salvo launch capability comes shortly on the heels of earlier reports that the Yasen-M line will support the new 3M22 Tsirkon winged anti-ship hypersonic cruise missile, as well as the upcoming Kalibr-M cruise missile. Tsirkon can travel at a speed of up to Mach 9 or around 9800 kilometers per hour, and is reportedly capable of evading enemy countermeasures through mid-flight maneuvers. Kalibr-M is a larger Kalibr cruise missile variant, sporting nearly double the range of the original at roughly 4,500 km. The Yasen-M class will retain the standard ten 533mm torpedo tubes of its predecessor. It will likewise support thirty-two P-800 Oniks anti-ship cruise missiles, or as many as forty 3M-54 Kalibr submarine-launched missiles.

Eight Yasen-M vessels are planned for Russia’s 2018-2027 armament budget cycle. Two of these—Kazan and Novosibirsk—have been launched and are on track to be commissioned in 2021. The remaining six Yasen-M submarines have been laid down and are in varying stages of construction, with all of them slated to enter service by the end of 2027.