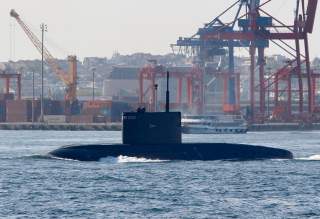 Key point: Moscow might not have the funding to build and maintain its envisioned submarines.

Russia’s ambitious submarine modernization program is spearheaded by two flagship projects: Borei, a heavy ballistic-missile submarine meant to replace the aging Delta and Typhoon lines in Russia’s nuclear triad; and Yasen, a nuclear-powered cruise missile attack submarine. Yasen’s current development incarnation is known as Yasen-M, an upgrade package that is meant to account for the sixteen-year gap between the first commissioned Yasen vessel-- Severodvinsk-- and the upcoming Kazan.

But whereas Borei development and production is proceeding at a steady pace, the Yasen-M project has languished in a series of back-to-back delays.

In March of this year, United Shipbuilding Corporation (UAC) chief Rakhmanov assured Russian state news that “everything is proceeding according to schedule” when asked whether a third Yasen-M vessel would be laid down in 2020. But earlier this summer, chief Alexey Rakhmanov told Russian state news that Kazan will not be transferred to the Russian navy in 2019 due to “design flaws”: “testing submarines is not easy. we are talking about how the control systems, which were used for the first time on this submarine, work. Besides, I won't lie, a number of design flaws were discovered."

A recent statement from Sevmash CEO Mikhail Budnichenko confirms the delay, while revealing that two upcoming Yasen-M submarines are slated to be laid down over the next two years: "These submarines will approximately be laid down in 2020-2021." When asked for delivery estimates, Budnichenko said that “the construction cycle for these submarines is seven years,” suggesting a 2027-2028 service timetable for the Yasen submarines.

The full extent of the Yasen-M upgrade package remains shrouded in mystery and is likely to change with subsequent releases over the next several decades. Possible improvements include a modernized onboard electronics suite, as well as significantly smaller acoustic signature and shorter hull.

Kazan’s latest field testing suggests that the Yasen class will also be one of the few submarine lines large enough to accommodate Kalibr-M, a heavier, larger Kalibr cruise missile variant with nearly double the range of the original at 4,500 versus 1,500-2,500 kilometers.

Technical issues notwithstanding, the Yasen-M project suffers from an all-too-common ailment of Russia’s naval modernization drive: steep production costs against a modest budget. At $1.6 billion per unit, Yasen-M is nothing if not modestly priced when compared to the $2.7 billion cost of the competing Virginia-class line. But $1.6 billion is a severe commitment by the standards of a Russian defense budget that rarely exceeds $70 billion, especially when a single Yasen vessel reportedly costs twice-- and according to some analyses, thrice-- as much as its Borei counterpart.

When it comes to allocating modernization funds, Russia’s military establishment has always-- and for good historical reason-- prioritized its ground and air forces over its navy. Six Yasen-M vessels are currently at various stages of testing and construction; in the short term, creating more space between their delivery dates could free up much-needed resources to successfully deliver the Knyaz Oleg and Generalissimus Suvorov Borei-class submarines before turning their attention back to the more expensive Yasen project.