Russia's New Armata Tank: The Best Tank in the World? 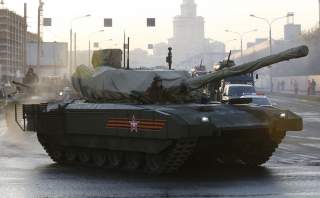 From anti-slip coating to on-site lavatories, not a month goes by without news of yet another addition to the T-14 Armata tank’s burgeoning features list.

As with many of their other upcoming flagship weapons, the Russian Defense Ministry often supplements these revelations with a steady trickle of in-depth manufacturer insights.

One of the most recent comes courtesy of Armata Deputy Head Engineer Andrei Makhnin, who spoke with the official television channel of the Russian Defense Department, Zvezda, about Armata’s 7.62 mm machine gun: “to facilitate the use of a 7.62 mm tank-mounted machine gun outside of tank formation, we developed a remote reloading mechanism. With it, the moving part was installed automatically (at the operator’s signal).” The electrical components powering this complex mechanism are “hermetically sealed” so as to prevent any possible contact with water, Makhnin added. The Armata MBT also sports a Kord 12.7mm heavy machine gun, relevant against light armor and certain types of aircraft. Whether or not Armata’s onboard Kord is operated by the same kind of proprietary reloading mechanism as its 7.62 counterpart is unknown, though rather unlikely given the additional technical complications involved.

Even barring the more far-fetched claims that Armata runs on Mars and fires railguns, there is little question that the T-14 presents a revolution in tank design. As opposed to, say, the more contentious debate over the relative merits of the Su-57 against the F-35, Armata handily surpasses its NATO MBT counterparts in the traditional performance areas of firepower, mobility, and survivability.

This discrepancy stems from critical differences in military doctrine. Since the second world war, tanks have been an indispensable tool of Russian (then Soviet) force projection across vast eurasian frontiers. Meanwhile, the US is a maritime nation that invests in air and sea power solutions for its force projection needs; the carrier strike group is perhaps the pinnacle of this approach to warfare.

But the Armata outperforms the competition at a steep cost, at least relative to the Russian defense budget. Preliminary estimates put Armata at four million dollars per unit, as opposed to the six million of the comparable US M1A2 Abrams. This may be a good value in comparative terms but nonetheless imposes a massive strain on a roughly 60 billion dollar budget that’s being stretched as thin as possible to finance an ambitious naval, air force, and missile defense modernization program.

Armata production numbers have fallen colossally short of the initial Russian army estimate of 2,300 serial units by 2020, with no obvious solution in sight. A preemptive export strategy-- similar to what’s being attempted with the Su-57-- could potentially allay some portion of the costs, but it’s exceedingly difficult to envision Armata export profits on a scale necessary to finance the thousands of purchases necessary to meet Russia’s goal of filling 70 percent of its MBT roster with T-14’s.

This is not to suggest, however, that Armata has no place in the Russian land forces. To the contrary, there are several compromise options available to Moscow. The most obvious has already been mentioned by Russian commentators: the Armata platform doesn’t have to be a take it or leave it proposition. The Russian military can trim Armata’s cost by sacrificing superfluous features like toilets, while distilling its core performance capabilities into a lean, cost-effective production process that can be gradually expanded with revisions and variants over the coming decades.