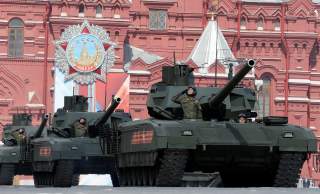 Russia’s Armata series of armored combat vehicles will likely serve for roughly three decades before being replaced by new systems. Those future combat vehicles could be fundamentally different from the Armata series or any other previous armored vehicles. However, the Russians have only the vaguest notions of what such machines might look like.

“A lot of new prototypes are currently at the concluding stage of their development —the Armata, Kurganets-25, Bumerang platforms and others—these are traditional means,” Col. Gen. Sergei Mayev, former head of the Russian Ministry of Defense’s Main Auto and Armor Directorate, told the state-owned TASS news agency.

“They will serve for no less than 25-30 years. They are expected to be replaced by the types of armaments based on new physical principles."

Presumably, the Russians might mean a new generation of weapons such as lasers, microwaves or railguns, but it is likely that Mayev is simply saying that there is no way to tell just yet. However, Mayev does seem to believe that advanced unmanned ground systems will play an increasingly important role within the Russian Ground Forces within the next decade or so.

"I mean, of course, ground forces. As for the air, the possibilities of using robotized systems are more uniform than on the ground," Mayev told TASS.

However, these future Russian innovation might not amount to much.

“This is a typical Russian reference to some futuristic weapon which they always imagine will come down the line 25-30 years from now,” Center for Naval Analyses senior research scientist Michael Kofman, a specialist in Russian military affairs, told The National Interest.

“However, tanks have been fighting by shooting kinetic and shaped explosive munitions at each other since WWI. So we can say that a 100 years of development has not led to weapons based on new physical principles, in part because physical principles don't change all that much.”

At the same time, the Russians have been willing to press forward with new innovations such as unmanned turrets such as the one found on the T-14 main battle tank and novel concepts such as the Terminator tank support fighting vehicle more so than other armies. Thus, it is possible that the Russians have some interesting future land warfare concepts that they are working on.

And in the case of the T-14, the Russians might have found success. As some European armor officers assess, the T-14 could be a formidable machine that is more than a match for current U.S. and NATO tanks such as the M1A2 Abrams and the phenomenal German Leopard 2A7+ main battle tank. Of particular note is the Armata’s combination of speed, maneuverability and survivability.

“The T-14 has the same power output as the Leopard 2 or the M1 Abrams , however, with a combat weight of 48 tons, it is 20% lighter, resulting in a specific output of 31.3 hp/T (22.9 kW/T). In comparison its western counterparts with 24 hp/T (17.6 kW/T), this new vehicle is extremely agile,” Captain Stefan Bühler, graduate engineer at the University of Applied Sciences, Explosive Ordnance Disposal Officer at the NBC-KAMIR Competence Center for the Swiss Armed Forces and Commander of Tank Squadron 12/1, wrote.

“The T-14’s tracks are narrower in the current version compared to the Leopard 2 or the M1 Abrams, however, due to the significantly lower combat weight, wide tracks are also not absolutely necessary: the specific ground pressure will be about the same compared to the western counterparts.”

Further, given its combination of active protection systems, reactive armor and passive laminated armor, the T-14 could offer better protection for its crew than a comparable Western tank such as the Abrams. Moreover, Bühler argues that the Armata’s unmanned turret offers some survivability advantages.

“Based on all these considerations, it must be assumed that the T-14 Armata offers the crew a higher overall level of protection than its western counterparts, despite its significantly lower combat weight.”

However, there is one potential downside to the Russians’ pursuit of innovation in the Armata series: the T-14’s unmanned turret could prove to be a liability for situational awareness in combat. However, that debate is hardly settled.

“The discussion among experts now revolves mainly around the question of whether the commander lacks the necessary overview when sitting in the tank or whether TV cameras and electro-optical aiming devices can actually provide the same information as the optical aiming devices and observation equipment on the current generation of battle tanks,” Bühler wrote.

“A look into the sky provides the (technical) answer: the pilot of an F-35 can look through the aircraft with his head-up display – a computer generates a virtual 3D world from the video signals from the cameras mounted all around, which is then faded into his optics depending on the pilot’s direction of vision. With such technology, as offered by the Israeli company ELBIT Systems under the name ‘Iron Vision’ for use on armored vehicles, the commander of a T-14 could see even more than the commander of a battle tank with a manned turret.”