Eastern NATO? Lukashenko Calls for CSTO Alliance to Unite Against the West 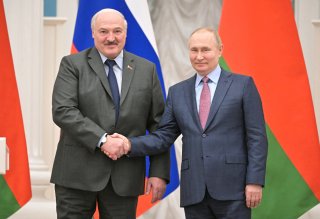 Belarusian president Alexander Lukashenko called on the Collective Security Treaty Organization (CSTO), a military alliance of former constituent republics of the Soviet Union, to pursue greater political and military integration in response to a perceived threat from the West and NATO.

Speaking at a summit meeting with the bloc’s leaders, Lukashenko also argued that the West had imposed “hellish sanctions” against Russia and Belarus and had worked to prolong the conflict in Ukraine to weaken the Kremlin. He argued that this situation could have been avoided if CSTO had acted in a united fashion, functioning as an Eastern counterweight to NATO.

“Without a unified front, the collective West will build up pressure on the post-Soviet space,” Lukashenko said during a meeting with Russian leader Vladimir Putin, President Kassym-Jomart Tokayev of Kazakhstan, President Sadyr Japarov of Kyrgyzstan, President Emomali Rahmon of Tajikistan, and President Vahagn Khachaturyan of Armenia.

Although Belarus has not directly participated in Russia’s invasion of Ukraine—Belarusian troops intended to be deployed to the conflict reportedly came close to mutinying rather than accepting their intended mission—Russian troops invaded northern Ukraine from Belarus on February 24, including through the “exclusion zone” surrounding the Chernobyl nuclear power plant, which is shared by the two countries. Belarus has also aligned itself politically with Russia, voting against United Nations General Assembly resolutions to condemn its invasion.

Minsk has paid a heavy price for this support. Sanctions on Russia by the United States and the European Union have been expanded to include Belarus, and Belarus’s Belta state-run news agency has estimated that $16 to $18 billion in annual exports to Western Europe had been blocked.

Lukashenko has denied Belarusian involvement in the war in Ukraine and argued that his descriptor as “an accomplice of the aggressor” was an unfair characterization of his role in the conflict. At the same time, he has vocally supported Putin, accusing Kyiv of supporting neo-Nazi ideology, denying Russian atrocities, and insisting that the invasion was necessary in order to protect Russia from NATO—a talking point that many Russian officials have repeated since February.

“Followers of the Nazis are obsessed with the idea of revenge, but they are not ready to fight openly against the heirs of the Soviet people,” Lukashenko said during a speech on May 9, Russia and Belarus’s shared Victory Day commemorating the military defeat of Nazi Germany in 1945. “That’s why they are flooding Ukraine with weapons, waging war on memorials, symbols, and veterans.”

“Attempts to suffocate” Belarus through international sanctions would “only make it stronger,” he added.