The 'Egg Beater': How The Sikorsky R-4 Gave Rise to Nearly Every Modern Helicopter 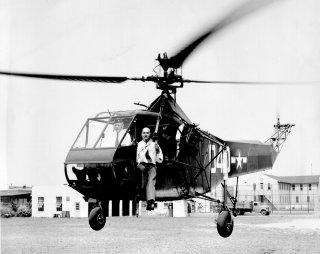 In the world of military hardware, the “first” new innovation can influence nearly everything that follows. This is certainly the case with tanks, which can all be traced back to the British Army’s first prototype “Little Willie,” while in the case of the assault rifle one can see a little bit of the StG44 in the small arms employed on the battlefields of the world to this day.

The modern military helicopters—from the UH-60 Black Hawk to the AH-64 Apache—can all be traced back to the Sikorsky R-4 and its prototypes, which had earned the nickname “The Egg Beater.”

And while it is easy to think of the Korean War for its medical helicopter and the Vietnam War for its transport and helicopter gunships, the R-4 was actually introduced in World War II. However, unlike the combat role that it would see in subsequent conflicts, the first military helicopters were primarily used in rescue missions.

America’s program actually began with Igor Sikorsky, the Russian immigrant who founded Sikorsky Aircraft in his adopted homeland. While he had received backing from friends to start an aircraft manufacturing company that would develop fix-winged planes for the U.S. military, he actually pioneered the concept of helicopters. This included the VS-500, an aircraft that used one large rotor blade to generate lift while a smaller rotor blade mounted on a long boom generated anti-torque.

That configuration remains largely unchanged more than eighty years later. From the first prototype, he refined the R-4, a two-seater helicopter that took its first flight in January 1942. Within a year the U.S. Army Air Forces ordered twenty-nine prototypes of the still “experimental” aircraft and these were deployed form Burma to Alaska, while several were assigned to the U.S. Navy, U.S. Coast Guard and the British Royal Navy. The aircraft showed such promised that by 1944 some 130 were produced.

The R-4 helicopters were used primarily for observation and supply missions, but a few were sent to the China-Burma-India Theater where the aircraft were used in two daring rescue missions. The first was in the spring of 1944 and marked the first occasion when the R-4 was used in combat when the helicopter flew over occupied territory in Burma and rescued a team of liaisons who had crashed landed in the jungle. In a series of flights, the Sikorsky landed in a clearing and flew out the team members one by one.

It was the first recorded rescue by helicopter and proved so successful that the R-4 was used in eighteen subsequent missions within a few days.

According to the National Museum of the United States Air Force, which has one of a handful of the surviving aircraft, in a letter to a friend, Col. Philip G. Cochran, commanding officer of the 1st Air Commando Group, wrote: “Today the ‘egg-beater’ went into action and the damn thing acted like it had good sense.”

The R-4 also had the distinction of being the first helicopter to land on a ship at sea, the USS Bunker Hill (CV-17), and by 1952 the Army’s new Egg Beater had a collective unbeatable record of four hundred thousand hours without a crash due to mechanical failure!