EMALS: How U.S. Navy Aircraft Carriers Will Sail Into the Future (And Dominate) 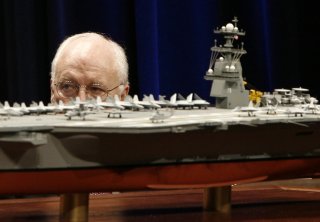 In an op-ed for Defense News this week, Vic Adm. Lewis W. Crenshaw Jr. (retired) suggested that among the U.S. Navy's Ford-class “game-changing advancements” is the Electromagnetic Aircraft Launch System, or EMALS. This new system to launch aircraft was developed to replace the steam-powered catapults used on the Navy’s Nimitz-class carriers.

The technology made its debut on the USS Gerald R. Ford (CVN-78) and is expected to be integrated on the next two Ford-class carriers currently under construction. However, the technology hasn't been without problems. A fault in the power-supply system in June curtailed flight operations on the ship for several days while the crew and contractors worked to identify and address the issue.

“After several days of troubleshooting and assessing a fault in the launch system’s power handling elements, embarked EMALS experts and Ford’s crew restored the system to enable the safe fly-off of the air wing,” read a statement from the carrier in June.

At no point did the failure cause a safety-of-flight issue with the carrier, however. An alternate procedure to launch aircraft was utilized.

“The ship’s response to these EMALS challenges underscores our ability to identify and to correct issues impacting flight operations quickly. That’s the purpose of the PDT&T (Post-Deliver Test and Trials) phase,” Rear Adm. Craig Clapperton, commander of Carrier Strike Group (CSG) 12, also said in a statement as reported by USNI News. “The learning and improvement that results from pushing the systems will make the ship and air wing team better and more effective in future underway events.”

Despite the problems, it must also be noted that as of June the Ford had conducted 3,480 catapult launches and arrested landings with EMALS and Advanced Arresting Gear (AAG).

The integration of EMALS marked a substantial milestone for the U.S. Navy.

Moreover, EMALS was designed to more smoothly launch aircraft while reducing stress and wear and tear on the airframes themselves. The system was also engineered so that any of the ship’s four catapults can draw power from any three energy storage groups.

In theory, it was designed to be lighter, more reliable and even less expensive than the steam system. However, testing may have revealed that the Navy underestimated the workload and even the number of sailors required to operate the system.

Despite the potential issues, which will likely be resolved, Crenshaw has remained convinced of the merits of the system.

“EMALS will enable Ford-class carriers to accommodate 160 sorties per day during normal conditions and an anticipated 270 during wartime operations,” he wrote in his op-ed.

“This is an almost 33 percent increase in sortie deployment capability from the Nimitz-class carrier’s capability during peacetime, and a 12.5 percent increase during wartime. This represents a drastic increase in the lethality and effectiveness of the ship,” added Crenshaw. “The U.S. Navy is the world's most dominant seafaring force, and our sailors are second to none. The spirit of innovation embraced by the Navy and embodied in new technologies like EMALS and others on Ford-class carriers will ensure it remains admired by our allies and feared by our adversaries for years to come.”