Europe’s Getting Its Own Missile-Killer 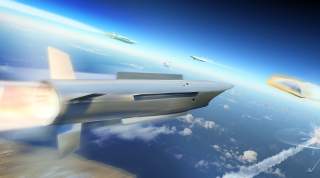 European missile-maker MBDA is working on a new high-altitude missile-interceptor, one that could represent the first step toward a uniquely European missile-defense system. But the new interceptor won’t solve what is probably the biggest problem with Europe’s missile-shield.

On Nov. 12, 2019, the European Union green-lit development of MBDA’s Timely Warning and Interception with Space-based Theater surveillance capability project, or TWISTER. The international missile-defense project involves France, Finland, Italy, The Netherlands and Spain and could enter service as early as 2030, MBDA announced.

“The interceptor component of the TWISTER project will ultimately become a key element in the contribution made by European countries to NATO’s territorial, population and armed forces defense mission while meeting the European Union’s level of ambition in the field of missile-defense,” the missile-maker stated.

The TWISTER missile is endo-atmospheric, meaning it needs to breathe relatively dense air and its sensors can handle the heat of air friction. That places it in roughly the same class as the U.S. Navy’s SM-2 missile interceptor and the U.S. Army’s Patriot and limits the munition to hitting incoming rockets while they’re no higher than around 150,000 or 200,000 feet.

Exo-atmospheric interceptors such as the Navy’s SM-3 and the Army’s Terminal High Altitude Area Defense system can hit rockets as high as 300,000 feet.

MDMA wants to equip both sea- and land-based launch systems with the TWISTER interceptor.

If TWISTER works and European countries find the money to field it, the new interceptor could complement the mostly-American systems that currently comprise Europe’s defense against missile threats such as those from Iran. Under the auspices of NATO the United States has installed land-based SM-3s at two “Aegis Ashore” sites in Romania and Poland. American warships carrying SM-2s and SM-3s are based in Spain for patrols across the Mediteranean Sea.

But interceptors aren’t the main weakness in Europe’s missile shield, explained Ian Williams from the Washington, D.C. Center for Strategic and International Studies. “The missile defense architecture currently protecting NATO from Iranian missile attack is fragile due to its heavy reliance on a single ground-based radar to track missiles headed towards Europe,” Williams wrote. “This single point of failure makes the entire system susceptible to technical malfunction or concerted enemy action.”

One especially critical element of the [European missile-shield] is a TPY-2 X-band radar deployed in eastern Turkey. This radar is oriented to track Iranian missiles bound for Europe. It is indeed the keystone of the whole architecture. Without it, the capability of the Aegis Ashore sites to defend Europe becomes crucially degraded. ...

If the forward TPY-2 radar failed to provide early tracking information for any reason, the defended area of the two Aegis Ashore sites would degrade significantly. Many military bases and major cities across Europe would become undefended.

The SPY-1 radars installed at the Aegis Ashore sites are simply too limited in range to enable defensive coverage of Europe on their own. In some cases, the SPY-1s would detect Iranian ballistic  missiles  too late for the system to engage the target missile. Longer-range, higher-flying missiles headed for western Europe could overfly these radars altogether.

Therefore, nominal operation of the forward-deployed TPY-2 is essential for the Aegis Ashore sites to fulfill their mission of NATO territorial coverage. Absent the data provided by the Turkey TPY-2, the defended footprints of both Aegis Ashore sites shrink dramatically.