In Europe, the Marines Are Bringing Force Design 2030 to Life (and War) 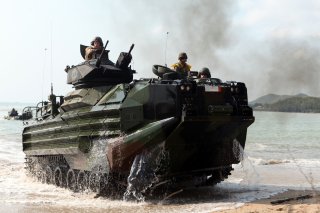 “Our forces forward deployed to Europe are exercising these concepts in support of [United States European Command] EUCOM,” Berger told the House Appropriations Subcommittee on Defense in a 2023 budget hearing.

An essential concept informing the Corp’s Force Design 2030 effort is to pivot the Corps more fully to its expeditionary roots and avoid replicating capabilities best suited for the Army.

“What capabilities does the Marine Corps need to bring the joint force into the future? Heavy armor was useful in the past but going forward it is not what the Marine Corps will need. It is hard to move and hard to sustain. You don’t need two Armies as the Army is good at that. We want to be smaller, more agile, use precision weapons, loitering munitions, and long-range precision fires,” Berger told the House subcommittee.

An interesting component of the Corps’ approach is to ensure that lethality and ground-attack proficiency is not at all compromised by the shift in strategic and tactical thinking. Lighter weight and faster tactical vehicles, for example, are being armed with heavy anti-armor weapons such as Javelin anti-tank missiles. To reinforce this vision, Berger cited the effectiveness of Ukrainian soldiers against Russian forces who have demonstrated great success using fast, ambush-style hit and run tactics to destroy heavy armor from dispersed, dismounted positions. Perhaps this is indicative of Marine Corps thinking, as this kind of tactic not only makes Marines easier to deploy from the ocean but also gives them a decentralized, less condensed, yet highly lethal ground force which could potentially be deployed effectively against heavy armor.

“We need to allow the Marine Corps to respond at a moment's notice and respond to a crisis that we did not anticipate or see coming. That is our mandated job by Congress…to be ready to fight a war. We are taking risks but you have to do that to get to where you need to be in the future. The bigger risk is you are going to be outpaced,” Berger explained.

Extending land-attack from the sea with Marine Expeditionary Units is central to this strategy. For instance, Berger cited the new, soon-to-be-deployed Amphibious Combat Vehicle (ACV) slated to replace the legacy Amphibious Assault Vehicle. The ACV is a wheeled vehicle which is not only fast and efficient from ship to shore but also capable of deeper land penetration. Once a beachhead is secure, for instance, a new ACV can transport Marines deeper into combat and conduct forward attacks.

“We made initial assumptions three years ago based on the best forecast we had about the threat in the future. Assumption is we are going to need more maritime force and the pacing threat is China. Over the past three years, we have conducted wargames and tested the ideas and warfare concepts and equipment,” Berger said.