Europe Sees China as a Problem in the South China Sea 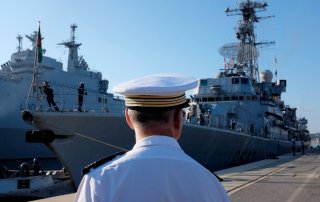 In an online discussion hosted by the Washington-based think-tank the Center for Strategic and International Studies, Vice Admiral Hervé Bléjean, Director General of the EU Military Staff, explained how Europe sees its role in Maritime areas.

Adm. Bléjean explained that Europe does see Chinese behavior at sea as problematic and that the continent considers the need to “connect with like-minded nations…to counter some activities from the South China Sea to the Black Sea,” referencing China’s extensive and very unrecognized claims to the South China Sea as well as Russia’s land grab in Crimea.

The Admiral put China’s naval buildup into a more understandable perspective, explaining that “every two years the Chinese are producing the tonnage of the French navy” in new naval vessels.

One of the Admiral’s most poignant quotes concerned the initiative of individual states and their commitment to the Indo-Pacific region. There is more traction for more states to go to the region and showcase their interest in keeping it free and open. Along with the United Kingdom, which is no longer a part of the European Union, Bléjean referenced Germany and France, Europe’s number one and two economic powers respectively.

While France is not shy about flexing its military muscle abroad, Germany has been loath to exert force in other countries, even within the context of multi-national United Nations-led coalitions. As a result, German defense spending is a paltry 1.3 percent of GDP, well below NATO’s 2 percent spending target. Still, Berlin has shown an increasing appetite for involving their arms forces in freedom of navigation patrols, if not combat operations.

The German frigate Bayern is currently on an Indo-Pacific deployment, the first German warship to sail through the area in nearly two decades. Though the ship’s deployment sustained criticism when China denied it access to a Shanghai port, the fact that the ship is in the region at all is significant.

However, Adm. Bléjean stated that Europe is “very concerned about Russia” and that the Eastern European country remains a threat to European peace and security. Multiple fires are burning in Europe’s backyard: along with the migrant crisis at the Poland-Belarus border, reports that Russia is massing men and material at its border with Ukraine has raised alarm bells in European capitals.

One of the biggest hurdles to responding to hypothetical Russian aggression in Ukraine concerns logistics. “Military mobility is a NATO concern that only the EU can address,” the Admiral explained. At the moment, “it is easier for a migrant to move about than a U.S. soldier.”

Caleb Larson is a multimedia journalist and defense writer with the National Interest. A graduate of UCLA, he also holds a Master of Public Policy and lives in Berlin. He covers the intersection of conflict, security, and technology, focusing on American foreign policy, European security, and German society for both print and radio. He tweets @calebmlarson.