Even in a Sandstorm, Adversaries Can't Hide From the Space Force 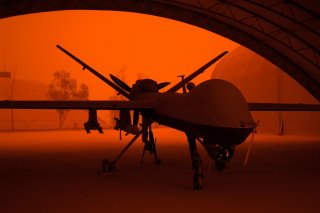 During the Gulf War and Operation Iraqi Freedom, enemy Iraqi and terrorist forces often used sandstorms, cloud cover and inclement weather conditions to evade detection by overhead surveillance drones. While this did not always work, the tactic became well known and helped inspire numerous innovations designed to help coalition forces “see through” impediments caused by weather obscurants. Technological advancements in this field have only accelerated since.

More weapons systems, missiles, bombs, and sensors are now engineered with “all-weather” sensors such as millimeter-wave detection and other technologies. These innovations can bring new levels of resiliency and precision to air-fired weapons, such as the new Stormbreaker weapon which uses a tri-mode seeker with millimeter wave, infrared, and laser targeting. Beyond the now-ubiquitous EO/IR sensors, similar technologies abound, such as systems engineered to help helicopter pilots see through “brown-outs” or “degraded visual environments.”

Having a detailed advanced understanding of the current and upcoming weather naturally bears heavily upon strategic and tactical dynamics in warfare. Newer, more accurate, and timely weather data, tailored to the needs of military decisionmakers, can enable leaders to adjust tactics, change course or make advantageous maneuvers in battle.

That’s just the capability GA-EMS aims to deliver, according to a statement. “The GA-EMS EWS spacecraft will have the capability to provide the Department of Defense with operational weather data support as a precursor to an innovative future weather capability.” What’s more, GA-EMS data explains their EWS prototype satellite system as a “pivot...from solely an on-orbit sensor demonstration program.”