F-35 Lightning Plus StormBreaker: No Tank Will Ever Be Safe Again 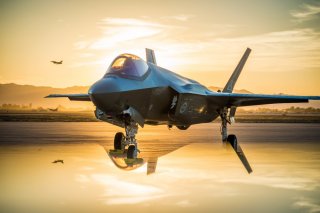 The Lockheed Martin F-35 Lightning II stealth fighter is known for its growing arsenal of precision air-to-air and air-to-ground weapons, a 25mm cannon for close air support, and an advanced suite of electronic warfare weapons. But soon, the F-35 will kill tanks as well.

The tank-killing technology will arrive in the form of the fast-emerging StormBreaker weapon, a first-of-its-kind, air-launched precision weapon able to track and destroy moving targets from ranges as far as forty nautical miles. StormBreaker-maker Raytheon reports that the F-35 is now testing with the StormBreaker in anticipation of combat deployment.

The StormBreaker brings unprecedented air-attack technology such as a tri-mode seeker enabling infrared, millimeter wave, and semi-active laser guidance targeting options as well as a two-way data link allowing the weapons to adjust course in flight. The weapon is not only all-weather capable due to its millimeter wave technology but also brings additional fuzing and energetics or explosive options. The integration of new explosive materials and warhead components is what enables the weapon to kill tanks, a Raytheon statement said.  Specifically, the StormBreaker warheads are equipped with shape charge jets, fragmentation, and other technologies which bring an ability to destroy tanks.

“Warheads, equipped with shape charge jets, fragmentation, and blast-charge effects, and an option for a delayed smart fuze, are powerful enough to defeat tanks,” the statement explains.

The weapon gives the F-35 the ability to carry as many as twenty StormBreakers at one time, allowing the jet to track and destroy multiple moving targets on a single mission. While air-dropped precision bombs can pinpoint specific areas to bring great destruction to enemy armored forces, the ability to track and destroy vehicles from the air in this fashion brings new tactical possibilities.

“The multi-effects warhead really separates this air-to-surface weapon from its predecessor and other munitions in its class,” Alison Howlett, program director for StormBreaker smart weapon at Raytheon Missiles & Defense, a Raytheon Technologies business, said in a company statement.

While HELLFIRE-armed helicopters can track and kill tanks from the air, they are of course much more vulnerable to incoming enemy ground fire and need to operate within much closer striking ranges. A HELLFIRE can travel roughly eight kilometers to target, a significant and tactically impactful range. An F-35 fired StormBreaker will operate with an ability to kill tanks on the move from up to forty miles.

The StormBreaker’s delayed fuze can bring additional penetrating effects designed to fire through an armored exterior and explode further into the vehicle, maximizing destruction. Fragmentation upon detonation, yet another element of a multi-effects warhead, can expand the sphere of damage to a tank, making its explosive ammunition compartment more vulnerable.

The ability to integrate and launch a StormBreaker from the F-35 is made possible by advanced software upgrades, increments, or “drops” configured to expand its weapons arsenal. Each software drop enables more elaborate fire-control, targeting and weapons release capabilities, something which brings an entirely new sphere of attack possibilities.