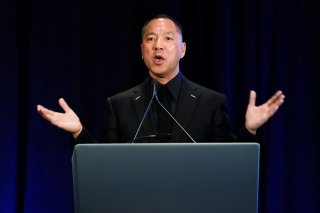 Guo Wengui, a controversial Chinese exile tied to several right-wing figures in the United States, filed for bankruptcy on Wednesday after a judge fined him $134 million for attempting to hide his yacht from creditors.

Guo, whose net worth was once around $1.5 billion, alleged in a court filing under the name Ho Wan Kwok that he had no more than $500,000 remaining, against roughly $500 million in liabilities.

The financial claim against Guo originated after the “Pacific Alliance Asia Opportunity Fund” (PAAOF), which lent Guo $30 million in 2008, sued him for failing to repay it. As of 2022, Guo’s debt to the corporation has grown to $116 million due to accrued interest.

In a New York state court, Judge Barry Ostrager had ordered Guo to pay a fine of $500,000 per day for each of the two hundred sixty-eight days he had kept his $38 million yacht, the “Lady May,” outside the reach of his creditors, including the PAAOF. Ostrager ordered Guo to pay the sum in five business days – a decision that likely led Guo to file for Chapter 11 bankruptcy, as repayment orders are paused during bankruptcy proceedings. Guo also appealed Ostrager’s decision, claiming in court filings that he does not control the yacht.

The “Lady May” briefly made headlines in August 2020 after right-wing organizer Steve Bannon, who served as President Donald Trump’s White House Chief Strategist in 2017, was arrested on the yacht in 2020. Bannon was arrested for his alleged participation in a scheme to defraud Trump supporters by soliciting donations to construct a fictitious border wall. Bannon and Guo worked closely together before Bannon’s arrest. The two co-founded the right-wing “GTV Media Group” in April 2020, and Guo ultimately paid Bannon $1 million for his services to the network from 2018 to 2019, although he cut ties with Bannon following his first arrest. Guo was also one of the primary financial backers of the “Gettr” alternative social media network, and launched the “New Federal State of China,” an organization devoted to removing the Chinese Communist Party from power in Beijing.

At the beginning of the bankruptcy process, the Chinese media mogul also put up his Manhattan condominium for sale at $45 million. He purchased the property for $68 million in 2015.