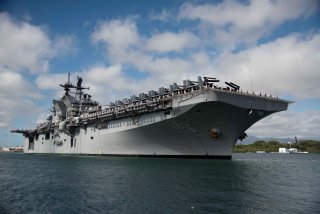 The Navy considers its sea basing capabilities to be highly important to the fleet’s future maritime operations, especially in the Pacific’s vast geographic expanse where competition with China has become the service’s focus. Indeed, in response to Chinese naval provocations and modernization, the Navy has developed a Distributed Maritime Operations strategy, a specific effort to expand the Navy’s envelope of operations and incorporate stronger networking, multi-domain connectivity, and disaggregated operations across otherwise disconnected combat areas.

Another critical element of sea basing pertains to the fact that in immense maritime areas like the Pacific, it is not always practical to base or launch helicopters, expeditionary forces such as Marines, and Special Operations Forces from land. Land-launched operations in the Pacific could simply be too far away for critical, time-sensitive naval warfare operations. This reality has guided the Navy’s plans to modernize its fleet and expand its reach. Indeed, the Navy is now honing its amphibious warfare capabilities, strengthening its command and control capabilities, and seeking to deliver effective combat power like Marine Corps Expeditionary Units in close proximity to island chains, coastal areas, or other maritime targets. Sea basing, and ESBs in particular, will greatly support these amphibious operations by adding critical command and control dimensions to off-shore operations.

The ESBs offer supporting MH-53H helicopters, supply and logistics support capabilities, and can launch Rigid Hull Inflatable Boats that have become critical to Special Operations missions, according to a report from Naval Sea Systems Command.

Perhaps of greatest significance, this added command and control functionally could help support the Navy’s growing fleet of unmanned systems, a fast-evolving dynamic already reshaping concepts of operation for maritime warfare. Expeditionary Sea Bases and big-deck amphibious assault ships could, for instance, function as “mother ship” command and control nodes operating entire fleets of interconnected air and surface drones. These unmanned systems could venture into high-risk areas to conduct surveillance, operate as targeting nodes, hunt for mines, or even conduct attacks when controlled by human decisionmakers.