Ukraine’s Drone Boats Are Holding Back the Russian Navy 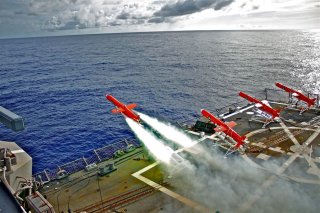 Drone boats, anti-ship missiles, and other maritime weapons appear to be helping Ukraine successfully defend its critical coastal areas along the Black Sea.

The Pentagon says the United States has provided some training on unmanned coastal defense vessels. However, Ukraine is also capable of producing its own anti-ship missiles, one of which has apparently destroyed a Russian warship.

“They have their own ability to manufacture anti-ship cruise missiles, the Neptunes. That is a Ukrainian product and they can still produce those,” a senior Pentagon official told reporters, according to a Pentagon transcript.

Perhaps this is one key reason why Russia has not, as of yet, launched a second amphibious attack from the Black Sea, something they did at the beginning of the war. Additionally, it seems somewhat surprising that Russian warships and submarines have not launched large numbers of long-range Kalibr submarine and ship-launched cruise missiles. Much like a Tomahawk, these Russian long-range weapons are likely engineered with precision guidance capabilities. A Tomahawk can fire from as far away as 900 miles, so it is expected that these Russian weapons could attack at standoff distances. However, there are anti-ship missiles with very long ranges as well, so it is possible that Ukrainian-built shore-fired missiles could hold Russian ships at risk from far away.

Although specifics regarding the use of drone boats are unavailable for security reasons, technology of this kind could be quite impactful for coastline defense. This would be particularly true if Ukraine employed a large number of them and was able to network them as “surveillance nodes” dispersed across a wide threat envelope. The boats’ effectiveness is largely dependent on how technologically sophisticated they are. Should they have long-range electro-optical/infra-red sensors, and an ability to network from beyond the radar horizon, they could certainly alert coastal defenses about any potential Russian seaborne threats.

The drones might be even more effective if they are able to target moving Russian ships and act as a forward node using some kind of data link or radiofrequency connectivity with aerial, surface, or coastal Ukrainian assets. Perhaps they could even tow sonar underwater tethered in a manner similar to how the U.S. Navy applies them. Purely in terms of deterrence, these platforms could keep Russian warships sufficiently away from the Ukrainian coast and complicate Russia’s efforts to resupply its forces throughout its offensive in southern Ukraine and the Donbas.

As for training, the U.S. Navy is well-positioned to have an impact, given its experience developing, equipping, and manufacturing its growing fleet of drone boats. Not only has the U.S. Navy been pursuing breakthroughs when it comes to autonomous military applications and networking with unmanned surface vehicles, but it is also developing emerging concepts of operation through which to maximize these platforms’ impact.