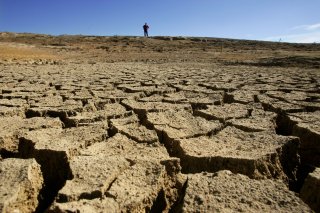 Earth’s changing climate is wreaking havoc on the planet’s all-important water cycle that could potentially cause even more devastating droughts in the coming years, climate scientist Peter Gleick recently claimed on The Climate Crisis Podcast.

“We’re getting more severe floods and more severe droughts. Temperatures have gone up consistently over the last many decades. That’s what people tend to think about when we think about climate change, but … those higher temperatures means the demand for water is higher,” noted the co-founder of the Pacific Institute in Oakland, California.

“The loss of water from our reservoirs evaporating off is higher. The demand for water from agricultural crops is greater. And so the warnings that the climate cycle and the water cycle are changing, and that those impacts are going to be increasingly severe, are now coming true,” he continued.

Gleick, who has testified before Congress on multiple occasions, has long warned that climate change poses a great threat to the Earth’s hydrologic cycle.

“It’s hard for those of us who have been working on climate sciences for so long not to think, at least to ourselves and maybe sometimes, admittedly, out loud, ‘Oh … we told you so.’ We’ve been issuing these warnings for a long time,” he said.

“Some of the things that we thought we would see, we expected to see, we predicted we would see, we’re now seeing. It’s no consolation that we’re seeing those things now. It’s a vindication of the earlier work of many, many people. But it’s sad to understand that if the policymakers had paid more attention years ago, the impacts that we’re seeing now wouldn’t have been prevented, but would be much less,” he added.

According to the medical journal the Lancet in its annual Countdown on Health and Climate Change, climate change is expected to trigger massive food shortages, deadly disasters, and disease outbreaks that could potentially dwarf the death toll of the ongoing coronavirus pandemic, which has killed more than five million people worldwide to date.

The eye-opening report warned that “there is no safe global temperature rise from a health perspective. … Today’s adverse health impacts of climate change are varied and widespread. All of us have been or likely will be affected by climate change, with some hazards more easily recognizable than others. Climate change is worsening heatwaves, amplifying droughts, intensifying wildfires, supercharging hurricanes, and fueling flood risk through increased heavy rainfall events and rising sea levels.”

Furthermore, a separate report released by the United Nations World Meteorological Organization has revealed that the past seven-year period has been the hottest on record and that accelerating sea-level rise has hit new heights this year.