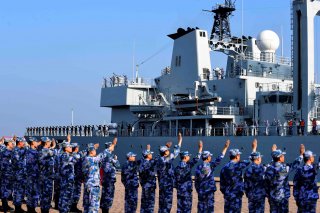 China’s “dual aircraft carrier strike group” concept is now taking a massive leap forward with the recent deployment of the countries’ first indigenously-built carrier through the Taiwan strait, a move which signaled that its second aircraft carrier will soon be declared operational and bring new threat dimensions to the United States and its allies both in the Pacific theater and throughout the world.

The Chinese Shandong aircraft carrier recently  entered into the South China Sea for exercises, according to a Chinese government-backed newspaper called the Global Times, which also quoted military analysts saying that Chinese plans to operate a two-carrier attack campaign is “no longer just a concept.”

What would it mean for China to have the ability to operate two carriers in tandem with one another on a single offensive strike mission? Certainly, the question is of great relevance to the U.S. Navy which earlier this year conducted several dual-carrier attack drills in the Pacific, a war preparation exercise able to demonstrate a greatly expanded capacity for regional power projection. Both Chinese carriers are reported to have a displacement of roughly fifty-tons and operate large numbers of fighter jets.

Not only do dual carriers double the sheer volume of attack sorties made possible during a conflict, but they also can greatly expand the maritime combat sphere, depending upon the quality and scale of the networking between fighter jets, surveillance planes drones and surface ships all increasingly engineered to interoperate in coordination with one another.

In the case of the Shandong, adding a second carrier to the Liaoning would also more than double fighter jet operational capacity for any kind of large-scale Chinese carrier attack. While the Liaoning can operate up to twenty-four carrier-launched fighters, the Shandong is apparently capable of operating thirty-six, according to the Global Times.

Dual carrier strike groups also introduce the crucial promise of improving ship-defense networks as, simply put, more nodes in the air naturally might enable surface ship commanders to receive the earliest possible warning of incoming or approaching attack.  Clearly, anti-ship missiles and enemy attack jets would be expected to confront U.S. carriers in the event of war. Perhaps on the U.S. front, one carrier strike group might simply wish to share data regarding fast-approaching enemy missiles, fighter jets, bombers, land artillery or really anything that might best be detected more quickly and at longer ranges. A carrier-launched surveillance plane could, for instance, locate an incoming enemy target such as an aircraft or a missile and radio flight trajectory or targeting coordinates back to a host ship or second carrier strike group, a development which could without question result in saving lives, not to mention the added prospect of giving ship-defending commanders a larger time window through which to find, and engage a fast-approaching enemy attack in need of being intercepted.