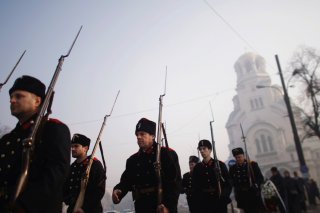 It might seem odd that the Soviet Union would look to embrace a famous Russian prince, more so given that the prince was considered a saint, but in the dark days of World War II, the Soviet leadership realized that just such a piece of the past would motivate and rally the people. As millions lay dead and with the nation’s industrial heartland occupied, the Russian peoples pulled together. For the Russians, the Second World War suddenly became the Great Patriotic War for the Motherland and as a result, much of the nation’s imperialistic nationalism was revived. It was after all the great Russian Prince Alexander Nevsky who had defeated the Teutonic invaders in the thirteenth century and thus one of the first pre-revolutionary awards was resurrected in a new form in World War II.

From Imperial Order to Soviet Order

In the Czarist days of Russia, one of the highest orders had been the one named for the famous savior of the Motherland. And it was another famous Russian leader who first introduced the order. On May 21, 1725, Empress Catherine I saw fit to introduce the Imperial Order of Saint Alexander Nevsky. This was originally awarded to distinguished Russian citizens who served the country with honor, and it was mostly awarded for political or military service. It was followed in honors by the Order of St. Vladimir and Order of St. Andrew. The Imperial version of the decoration was a red cross with the double-headed eagle crest of Imperial Russia between each arm of the cross. In the center was a small image of a rider on horseback, meant to represent Prince Alexander Nevsky.

The Imperial Order of St. Alexander Nevsky remained until the downfall of the Czar in the Russian Revolution, and it was never issued by the White Russian forces during the Russian Civil War. However, when the conflict with Nazi Germany became the Great Patriotic War the order was revived. This may seem surprising, but in fact, the Soviets had previously called upon Prince Alexander Nevsky to warn the Russian peoples of possible German aggression.

Joseph Stalin had wanted to use the film version, by the famous Russian directors Sergei M. Eisenstein and Dmitri Vasilyev, as a propaganda tool. Made in 1938 the film Alexander Nevsky actually was re-cut to downplay the anti-German sentiment when the Soviet-German Nonaggression Pact was signed. Of course, once the Germans invaded in 1941 the film once again became a propaganda tool, and the Soviets looked to Alexander Nevsky’s struggle with the Teutonic Knights as a way to motivate the nation.

On July 29, 1942, the Soviet Union reinstated the Order—minus the offending words “Imperial” and “Saint,” but kept the basic tradition alive. The Order of Alexander Nevsky was different from the Czarist version and actually featured the profile of the prince over a red star with the infamous hammer and sickle below him. It is worth noting that no images of the prince survived through the ages so the Soviets used the image of Nikolai Cherkasov, the actor who played Nevsky in the 1938 movie.

*The order was granted to more than 42,000 Soviet soldiers;

*About 70 foreign generals and officers were also awarded the order;

*1,470 military units earned the right to display the order on their banners;

*Since World War II the order has been regarded solely as a military award;

*The star of the order is worn on the right breast, while the ribbon is bluish-white with a red central stripe;