The F-14 Tomcat Scored The Most Kills In Iranian, Not American, Service. We Interviewed One Of Their Pilots 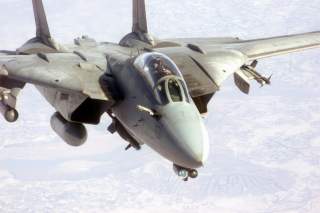 Key point: The Iranian Tomcats have taken to the air in several recent conflicts and even occasionally have confronted American planes.

The F-14 Tomcat is most famous for its 32-year front-line career as the U.S. Navy’s main carrier-borne fighter, not to mention its starring role in the 1986 movie Top Gun.

But the F-14 scored most of its aerial victories in Iranian, not American, service. Tehran bought 79 F-14As prior to the 1979 Islamic Revolution. The type played a major role in Iran’s war with Iraq in the 1980s.

Iranian F-14s shot down dozens of Iraqi planes. The Tomcat was, in the words of retired Iranian F-14 pilot Col. Mostafa Roustaie, “the last word in the fighter business.”

Hush Kit interviewed Roustaie about his five air-to-air kills as a Tomcat pilot. The lengthy interview is fascinating and worth your time. If you value Hush Kit’s work, be sure to donate a few dollars to support the site.

What follows is a brief excerpt from Hush Kit’s interview with Roustaie, where he recalls his most memorable -- and most heartbreaking -- aerial combat. The dogfight raged over western Iran on the morning of Oct. 26, 1982.

Guided by controllers on the ground controllers, Roustaie and his back-seat radar-intercept officer Lt. Reza Tahmasab were patrolling over the town of Ilam near the Iran-Iraq border when Tahmasab picked up, on radar, a high-speed target around 50 miles away.

“My senses were now in a state of heightened tension,” Roustaie recalled. “I could tell something was up. Moments later Reza said, ‘[I] don’t have whatever it was on my scope any more, but it was for real.’

Suddenly the ground controllers picked up the targets on their own radars and directed Roustaie to intercept. “Reza was also urging me to keep a tight left turn as he warned me of the closure rate and distance. I reached out and flipped the switches for a heat-seeking AIM-9 missile launch.”

At first, I got a glimpse of the number-two in trail, and moments later his number one came to view as well. It was hard to tell the type of the enemy aircraft but a guessing game ensued. Was it a MiG-21, or an Su-22 strike aircraft? Unsure, I pressed on, while Reza my good RIO kept an eye out for others.

The number-two aircraft noticed us and banked so hard to the right I thought to myself that maybe its pilot had gone mad. Now the flight leader was mine. I was prepared to launch the Sidewinder (my guess is that we were about three miles out) but he noticed us either through his fleeing wingman or somehow managed to see us, dropped his ordnance plus fuel tanks as he dove down hard to the right.

He entered into a valley and flew fast and furious over a riverbed towards Iraq. We gave chase about 200 to 300 feet above him and entered the valley.

This pilot seemed to know the area quite well. He weaved and whirled so well it enraged me. It was really difficult for me to accept that a 1950s MiG-21 was giving me a run for my money in my modern F-14.

A few instances he came close to within range of my heat-seeking missile but each time he would turn so sharply and timely as though he could read my mind. This Iraqi pilot was for sure a miracle worker. I was in awe of his superior airmanship. In a nimble MiG-21 he flew brilliantly.

I was chasing and admiring when my back-seater Reza called out our fuel level which made me come out of afterburner and give an audible sigh. I was like, Oh man we have come this far for a kill, and now we have to go back due to low fuel. I wanted to kill this guy by then.

Adrenaline was pumping through me, I was full of rage, disappointment and excitement. I thought if it comes to it, I am gonna have to ram this guy then. Maybe he read my mind. I don’t know.

At this point, for reasons I will never understand, this Iraqi pilot made a rookie mistake. Instead of climbing to clear a ridge, he turned and impacted the hillside at high speed as we flew over. Seconds ago, I wanted him dead. Now he was dead.

But my heart broke for him. Maybe I even shed a tear. That pilot was incredible. An exceptional airman. Even though I was unable to shoot him down, the kill was later credited to us as a manoeuvre kill.

Thirty-eight years after and I am still sad that a good pilot had to pass-on that way. He did not deserve to perish like that.

Roustaie in all scored five kills in the F-14, making him one of the few aces to fly the type. He retired from the air force but the F-14 continues to serve. Several dozen of the 79 F-14s Iran bought in the 1970s remain active.

Through a combination of engineering ingenuity and audacious espionage, Iran has made or acquired spare parts and kept its F-14s in working order — and even has improved them with new weapons and sensors.

The Iranian Tomcats have taken to the air in several recent conflicts and even occasionally have confronted American planes.

David Axe serves as Defense Editor of the National Interest. He is the author of the graphic novels  War Fix, War Is Boring and Machete Squad. This article first appeared last momth.