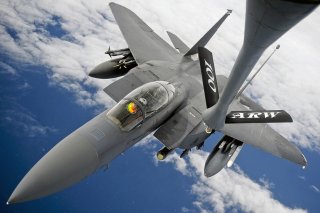 Despite its age, the F-15E Strike Eagle is getting some new upgrades that will make it an even more formidable aircraft in its ground strike role. After a nearly yearlong delay, the U.S. Air Force announced this week that it had begun fielding the Small Diameter Bomb II on the Strike Eagle. The “StormBreaker” air-launched, precision-guided munition was approved by the Air Combat Command (ACC) for use on Sept. 30.

The F-15E is the first aircraft cleared to use the SBD II Stormbreaker, while the F-35 Lightning II Joint Strike Fighter and F/A-18E/F Super Hornet are next in line to be equipped with the smart weapon.

“The SDB II StormBreaker is ready for operational use after undergoing extensive development and flight testing,” said Col. Jason Rusco, the SDB II program manager and Miniature Munitions Division senior materiel leader. “The fielding milestone is the culmination of years of incredible work conducted by our joint military and industry teams. This capability is unmatched and is a game-changer for national defense.”

The SDB II features a multi-mode seeker that can guide the bomb by infrared, millimeter-wave radar and semi-active laser as well as GPS and inertial navigation system guidance. The small size of the StormBreaker also enables the aircraft to have an increased payload per mission, which the Air Force says could require fewer aircraft to take on the same number of targets compared to larger weapons.

The StormBreaker can fly more than forty miles to strike mobile targets, which can reduce the amount of time that aircrews need to spend in harm’s way.

The SBD II came about as part of joint-interest Air Force and U.S. Navy major acquisition program, and the Air Force’s Armament Directorate’s Miniature Munitions Division here served as the acquisition lead in partnership with Raytheon Missiles and Defense.

The platform was tested by units at Eglin Air Force Base, Florida. Around 138 developmental and operational flights were conducted to certify the weapon for the F-15E.

While the development of the SBD II StormBreaker was beset by technical difficulties—which Defense News reported included a yearlong stoppage tin production—it appears that Raytheon has corrected the problems with the clips used to hold the bomb’s fins in place.

The defense contractor was reportedly forced to pause production in July of last year to redesign the components, but also to retrofit 598 bombs that had already been delivered to the Air Force and Navy. Production resumed this past summer.

Now that it has begun to be deployed, Raytheon have praised the SDB II’s capabilities.

“The weapon has proven itself in many complex test scenarios, against a variety of targets in extreme environmental conditions, and is now ready to fly,” said Cristy Stagg, StormBreaker program director at Raytheon Missiles & Defense. “With its multimode seeker and datalink, StormBreaker will make adverse weather irrelevant.”