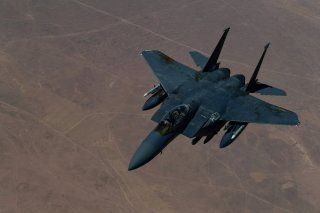 The U.S. Air Force’s top two leaders explained to Congress that it would substantially reduce the number of F-15EX jets it plans on buying. Rather than the previously planned 144 F-15EX airframes, the U.S. Air Force would instead like to buy just eighty.

In testimony given to legislators on the House Armed Services Committee, Secretary of the Air Force Frank Kendall and Chief of Staff of the Air Force Gen. Charles Q. Brown explained what was on their minds vis-à-vis the F-15EX.

Rather than replacing many older F-15C/D Eagle jets with the newer and more capable F-15EXs, the Air Force will instead replace the older F-15s either with remotely piloted drones or with nothing at all.

"We're accelerating the buy [of F-15EXs] to buy it out," Secretary Kendall explained, clarifying why the Air Force would like to accelerate short-term F-15EX purchases but also cap the fleet numbers to lower than expected amounts. "We're actually reducing the total quantity substantially."

Secretary Kendall explained that the F-15EX will still be an essential asset to the U.S. Air Force despite the lower airframe purchase numbers. Thanks to its payload capacity, the fighter jet can carry significantly more weaponry than the newer F-35 fighter.

General Brown also explained that the F-15EX would be the first jet in Air Force service for certification with the new Hypersonic Attack Cruise Missile (HACM). Certification is expected to be completed in the late 2020s. The F-15EX is an excellent platform for the HACM because of its large payload capacity and the HACM’s relatively large size.

However, the U.S. Air Force could opt to replace the older F-15s with the much more modern F-35 stealth platform, despite the F-35’s lower payload capacity. The stealth fighters have already replaced F-15s at RAF Lakenheath, a Royal Air Force base in the United Kingdom.

Still, it seems the U.S. Air Force is poised to reduce the number of fighter squadrons it has in service.

"The way I've been thinking about this is the equivalent capabilities of 62 fighter squadrons," General Brown explained, fielding a question about the U.S. Air Force's total fighter squadrons in the future.

"And what I think about is when you look at the operational comparison, the aspect of fighter squadrons the way we do today, with manned aircraft, versus what the Secretary and we are working through on the operational imperative, the combination of crewed and uncrewed platforms.”

The Air Force of the future will be both manned and unmanned—and possibly smaller—but it is shaping up to be a stealthier air force.