The F-16 Fighter Jet Is Getting a New 'Shield' 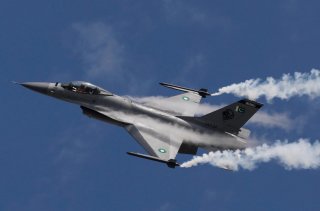 The F-16 multirole fighter aircraft, now made by Lockheed Martin, is getting a new shield system.

L3Harris Technologies, a Florida-based firm, announced in late March that it had received a contract from Lockheed to develop “a new advanced electronic warfare system to protect the international F-16 jet against emerging radar and electronic threats.”

The new shield will be a version of L3Harris Technologies’ existing Viper Shield technology.

“The L3Harris Viper Shield EW system enables the F-16 to continue to be one of the most effective combat aircraft in the world,” Ed Zoiss, the president of Space and Airborne Systems for L3Harris technologies, said in a company press statement.

“Our 30-year legacy on the F-16, coupled with the advanced technologies being developed for Viper Shield, provide our warfighters and international partners with unprecedented self-protection that helps to ensure mission success,” Zoiss said.

The F-16 jet has been in service since 1979. More than four thousand of them are active across the globe. It has become the airplane of choice for numerous coalition partners of the United States, in addition to the Air Force. Production of new F-16 jets finished in 2017 but the jets are expected to continue flying for much longer.

The F-16 jet was first developed by General Dynamics, which sold its manufacturing business to Lockheed in the early 1990s, with that company later becoming Lockheed Martin.

Israel is among the U.S. allies that favor the F-16 jet, as well as the F-15 jet, while also modifying them. Israel operates more F-16 jets than any other country in the world besides the United States.

“L3Harris designed Viper Shield to provide U.S. and global coalition partners with cutting-edge countermeasures against sophisticated, ever-changing threats. The baseline version is integrated into the aircraft fuselage, saving space for additional capability such as a fuel pod that could be attached externally to increase mission range,” the L3Harris Technologies press release said.

Last summer, the Navy awarded a $35 million contract to L3Harris Technologies for the design and fabrication of a prototype Medium Unmanned Surface Vehicle, with delivery expected by the end of next year.

The Air Force and DARPA have been testing new hardware and software that will let pilots command drones from the cockpits of their planes.

“The airplane was structurally configured to allow us to take our autonomy hardware and connect it directly to the flight control system of the airplane,” Skip Stolz, Director of Strategic Development for Autonomy Control, said in a recent interview with Warrior Maven. The program has been in development for quite some time and has recently undergone real-world testing.