Why the U.S. Navy Wants a Fully Automated Robotic Warship 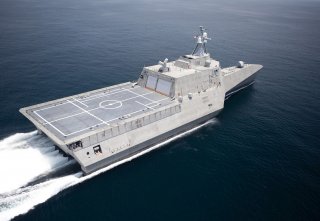 Last month, the U.S. Navy awarded L3Harris a $35 million contract to design and fabricate a prototype Medium Unmanned Surface Vehicle (MUSV), which is expected to be delivered for testing by the end of 2022. This is one of the latest efforts by the Department of Defense (DoD) to develop a fully automated robotic warship that could be capable of locating and tracking enemy submarines and other maritime threats.

Even as there has been a shift back and forth between naval concepts favoring large ships vs. smaller ones, the fleet architecture currently under development now includes large numbers of robotic vessels for the first time. However, as the U.S. Navy goes full-steam ahead towards large unmanned surface vessels (LUSV), which could be akin to an external weapons platform that is controlled remotely, larger manned surface combatants there is concern that the right course is set in its development.

As Defense News reported, Congress is actually reducing speed on the efforts, and for the second year in a row has slowed the development of the LUSV in the 2020 National Defense Authorization Act. The language of the bill calls for the Navy to have a working prototype with all systems tested and fully integrated before it can use procurement money to actually start production.

Chief of Naval Operations Adm. Michael Gilday told Defense News that this is deliberate and is meant to ensure that the systems are designed to requirement and perform to requirement. He added that the most important consideration is that the requirements are sound. To that end, he has called for the U.S. Navy to pursue a comprehensive “Unmanned Campaign Plan” so that the service avoids developing a ship that it doesn’t need or, in essence, is a solution to an unspecified problem.

Gilday specifically noted issues with the development of the Navy’s notoriously expensive Littoral Combat Ships (LCS), which are made up of two classes including the Freedom-class and the Independence-class. Both were originally intended to operate in littoral environments near shore.

Moreover, the vessels were designed to be highly flexible with easily swappable modules for different mission objectives, whereupon return to the United States the ships could be refitted for a new mission with different modules for such tasks as minesweeping, convoy escort and fire support. While modules can be swapped out at sea it is not considered ideal.

Earlier this month the Navy commissioned the 22nd LCS, USS St. Louis, with upgraded weapons for countermine, surface warfare and surveillance emissions. However, critics including members of Congress made the argument that the LCS is not survivable enough for major-power “blue-water” warfare.

This is why there is now questioning of U.S. Navy efforts to adapt commercial designs for unmanned surface vessels, which could include putting a bare-bones crew onboard while determining the best way to move toward a fully unmanned system.

Matthew Collette, an associate professor of naval architecture and marine engineering at the University of Michigan, told Defense News that strategy could be ripe with problems, including the fact that the commercial industry is going in a different direction from where the Navy needs or wants to go. With that in mind, the Navy may want to take a look at the LCS program and learn from those missteps.