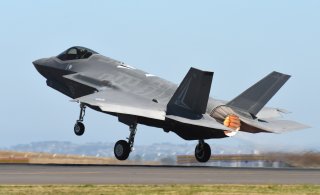 In what seems like a never-ending and sad debate, the costs associated with the development, production, and sustainment of the Lockheed Martin F-35 Joint Strike Fighter have for years presented substantive concerns for lawmakers, watchdog groups, observers, and U.S. military weapons developers. And yet, much of the discussion has at times lacked sufficient context--many times no context--or considered the full range of necessary variables.

While F-35 costs continue to be an all too familiar easy target for many, the concern continues to be taken quite seriously by Pentagon procurement, sustainment, and development officials and F-35 builder Lockheed Martin. And, sadly but quite predictably, for whatever reason, there have and continue to be many often unrecognized, yet impactful efforts to lower costs for the aircraft undertaken by Pentagon and Lockheed developers.

Many are again raising concerns that inflation will raise F-35 program costs, concerns which only intensify a longstanding debate with many factors. But what are the actual facts? Here is what the critics seem to forget.

The F-35 Is Cheap, If Compared Fairly

The largest areas of concern cited by critics of F-35 costs center upon sustainment questions and the projected cost overruns associated with operating, maintaining, and repairing the jets. A study on F-35 “cost-per-effect” by the Mitchell Institute for Aerospace Studies, which argues that F-35s can actually save billions in operational costs by performing large missions with fewer planes, cites F-35 hourly operational costs at roughly $35,000 per hour. This amount is recognized as being five to eight thousand more per hour when compared with existing 4th-Generation aircraft such as F-15s or F-18s.  However, what happens to overall costs when a single F-35 is capable of performing a mission requiring 10 4th-generation planes? Thus, the Mitchell essay argues, the “cost-per-effect” dynamic makes the F-35 a potentially huge money saver and financially efficient machine.

Yet another factor of great relevance to F-35 sustainment costs pertains to the lack of a “repair infrastructure,” requiring damaged aircraft to spend longer amounts of time out of service at depots. An interesting recent report in Defense News cites Air Force senior leaders told Congress that an intelligent investment in “repair infrastructure” would make a huge difference in driving down sustainment costs.

Improvements in computing and condition-based maintenance could greatly impact this equation as well. The F-35s evolving and improving Autonomic Logistics Information System (ALIS) computer system is, among many things, intended to track mechanical performance and identify potential points of failure well in advance of any malfunction. This can expedite the repair process as well, by ensuring needed maintenance on the jet is performed earlier in a sustainment cycle, therefore lowering costs. The pace of advancement when it comes to new software applications or advanced algorithms able to gather incoming sensor cues and data regarding technical elements of the aircraft could greatly reduce sustainment costs in ways that are not anticipated at the moment.

The F-35 Is an Incredible Value

Then there is the per-plane cost, which has continued to drop through the years as the aircraft has progressed. Years ago, a single F-35 cost well over $90 million, yet multiple sources now say that number has dropped to $80 million or even less due to multiple Lockheed cost reduction initiatives and increased production efficiency.  As for comparison, there are varying estimates of a cost-per-plane for an F-15EX plane, yet many sources place the jets price to be above an F-35, costing more than $85 million per plane.

Finally, there is the cost of survivability. Of course, a price tag cannot be placed upon a pilot or human. But conducting attack missions in an F-35 is inherently much less risky than operating in a 4th-generation plane. A fourth-generation plane is much more likely to be detected by enemies and operates with a much greater chance of being shot down by advanced air defenses.

Why are we still having this debate on F-35 costs? It seems silly at this point.