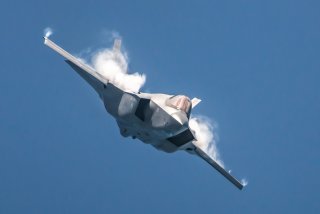 Criticisms and concerns regarding the state-of-the-art F-35 Joint Strike Fighter continue to echo throughout the halls of Congress, coupled with the emerging prospect that the 2022 budget could be amended to cut the size of any planned F-35 buy, leading many to contemplate the potential impact of any kind of large-scale reduction in the acquired number of Joint Strike Fighters.

What might it mean to the future force for there to either be a substantial decrease in F-35 force size, major delay or slow-down in production?

The prospect, which could manifest in the form of F-35 budget “mark-ups” in the House Armed Services Committee decreasing funds for the plane, would still need to survive Senate deliberations and be upheld in conference proceedings later in the year.

Nonetheless, the possibility is realistic, particularly in light of recent comments from prominent members of HASC, to include HASC Chairman Rep. Adam Smith, D-Wash., and Readiness Subcommittee Chair Rep. John Garamendi, who expressed sustainment concerns regarding the jet, according to a report in Air Force Magazine.

One interesting and significant element of this, which may have escaped more thorough consideration to some extent, may simply be that the F-35 will not remain as is in coming years, meaning the Pentagon and Lockheed developers have embarked upon an ambitious long-term sustainment and development plan for the F-35 called Continuous Capabilities Development and Delivery (C2D2).

While certainly a bit of a buzzword, the phrase speaks to a detailed plan to ensure the F-35 maintains its technological and performance edge in coming years through upgrades, weapons enhancements, software drops, and other kinds of ongoing modernization initiatives. This is the reason many planners anticipate the F-35 will fly well into the 2070s and beyond.

The stealth coating can be maintained and enhanced through a complex laser “peening” process, new software blocks or iterations will continue to add new weapons and sensing to the aircraft, expected technical improvements in the areas of sensor range and image fidelity, and AI-enabled computing enhancements are expected to ensure the F-35 continues to mature and evolve.

The upcoming F-35 Block IV software drop, for example, will integrate weapons interfaces enabling the use of a first-of-its-kind, long-range, precision-guided air-dropped bomb called the Stormbreaker. The weapon, engineered with a two-way datalink and tri-mode targeting seeker, is able to track, follow and destroy moving enemy targets in all weather conditions at ranges up to 40 miles.

While the F-35s weapons and stealth technology are argued by advocates to be unparalleled throughout the world, the aircraft’s largest margin of superiority when compared to rival platforms may be found in its sensing and computing. New stealth configurations, engine technologies, and other kinds of fighter-jet innovations will definitely emerge in coming years, yet the majority of combat performance-enhancing breakthroughs are likely to be in the realm of software, computing, mission systems, and sensing, meaning it may not necessarily be imperative to design a new airframe.

At the same time, regardless of its actual form, shape, or a particular destination, there is evidence that there must be technological breakthroughs found in the areas of fighter jet design and propulsion significant enough to inspire the massive acceleration of a now-airborne 6th Gen jet. However, current Air Force thinking seems to suggest that the new 6th-Gen is intended to fly alongside and “complement” the F-35 for decades into the future, suggesting that the new 6th-Gen aircraft may emerge as more of a next-gen, high-speed “F-22-like” platform. This would make sense given that the F-22 fleet is much smaller at only 186 aircraft and weapons developers have for years been clear that they are in great demand. Perhaps the decision not to restart an F-22 production line was in part aligned with plans for a 6th-Gen aircraft.

As for any kind of formal F-35-related Air Force indication, service Chief of Staff Gen. Charles Brown recently said the Air Force maintains its plan to acquire more than 1,700 F-35s and even responded to the possibility of an uptick in production to mitigate concerns from Combatant Commanders that they were not arriving fast enough.

Given all of this, when facing the proposed idea of a production slow-down or step back, many F-35 proponents and senior Pentagon leaders are actually thinking the opposite, meaning that rapid acceleration may be the best approach. Brown and others have discussed the possibility of an F-35 production “spike.”

“The quickest way to get capability on the ramp is to increase the F-35 production rate,” Ret. Lt. Gen. David Deptula, Dean of the Mitchell Institute for Aerospace Studies, told The National Interest in an interview.