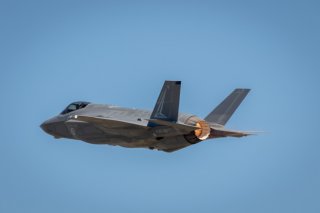 The Swiss Federal Council announced it has chosen the F-35 for its New Fighter Aircraft competition. Does this signal anything of significance? Certainly.

Any Swiss acquisition of the F-35, one could argue, actually reinforces the country’s long-standing commitment to peace and neutrality, given that the JSF is in part engineered to demonstrate a measure of air superiority to the point that it deters any potential aggressors, therefore managing to help keep the peace. This may seem somewhat paradoxical, as it is certainly a warfare platform, yet part of the intent of F-35 engineering was to build something with superior sensor reach and overmatch capability such that it would “deter” any potential adversaries from challenging U.S. air supremacy. This is of course a pressing question now, given that both Russia and China reportedly operate 5th-generation aircraft. However, are Chinese J-20 and Russian Su-57 sensors, weapons, and AI-enabled data processing comparable to that of the F-35?

As of several years ago, Switzerland maintains a stance of “armed neutrality,” meaning they support NATO’s peacekeeping mission but do not formally enter into the military portions of the alliance. The country has maintained a “neutral” stance since 1815. There could be an argument made that the F-35 could be viewed as a part of a “neutral” stance, in the manner in which it functions as a deterrent. The F-35 acquisition is a total package of F-35A aircraft, a sustainment solution tailored to Swiss autonomy requirements, and a comprehensive training program, a Lockheed statement reads.

From a strategic and tactical or force-posture position, there are several reasons why an F-35 might be appealing. Initially, Swiss consideration of the F-35 lends additional credibility to the established performance of the aircraft in training exercises such as the Air Force’s Red Flag wherein the aircraft managed to destroy a large number of adversary platforms without being seen. These kinds of dynamics might explain why the list of potential F-35 partners continues to grow at a rapid pace beyond the original scope. Japan, Israel, and South Korea are among more recent arrivals to the world of F-35.  Yet another significant element of the Swiss acquisition is that it arguably expands NATO’s reach, meaning regardless of the fact that Switzerland is not a NATO country, its ability to operate F-35s will make it easier and more efficient for Swiss air assets to share data and engage in secure communication with other friendly, U.S.-allied European countries.

The Swiss F-35 acquisition also speaks to a changing global threat environment wherein expansionist U.S. rivals such as Russia and China are themselves fast-acquiring more 5th-Generation platforms. The Chinese not only already have the J-20 and J-31 but also appear to be engineering a maritime J-31 variant to compete with the F-35B and F-35C.

There is yet another factor of interest to any possible Swiss decision, that being intelligence; an F-35 partner will of course have an ability to network and interoperate with other nations’ F-35s. The F-35 operates with a common data link enabling information sharing among all F-35s. There have been a few more recent breakthroughs in this area, including the hardening and expansion of an all-F-35 interoperable data link called Multi-Function Advanced Data Link (MADL) enabling multi-national F-35 data sharing. In addition to this, there are also considerable breakthroughs taking place enabling two-way LINK 16 data sharing between F-22s and F-35 and even growing connectivity between 4th and 5th-generation aircraft. with software programmable radio such as the Freedom 550.

Also, not to be overlooked, the F-35 arrival in Switzerland will doubtless bring a significant economic impact to include an infusion of jobs and possible technological sophistication in the world of aeronautics, weaponry, and aviation, not to mention stealth.

“The Swiss Air Force will receive F-35A aircraft, a sustainment solution tailored to Swiss autonomy requirements, and a comprehensive training program. The F-35 selection will deliver economic and technical advantages to the nation for decades to come. Swiss industry will have the opportunity to participate in research and development, production and sustainment opportunities that will extend their capabilities into the future,” a Lockheed statement said.

The Lockheed statement explains that much of the industrial work would take place in all Swiss regions.

“Swiss industry has the opportunity to compete for direct production of components for use on all F-35s produced, sustainment projects focused on supporting the Swiss Air Force and enhancing Swiss autonomy, and cybersecurity projects directly related to the F-35,” the statement reads.

To date, the F-35 has been selected by at least 13 nations and operates from 26 bases worldwide, with 9 nations operating F-35s on their home soil. There are more than 585 F-35s in service today, with more than 1,190 pilots and 9,750 maintainers trained on the aircraft, a Lockheed statement says.